The death of Dipo Famakinwa, Director – General, DAWN, has been described as a tragedy for the entire Yoruba race in particular and Nigeria in general.

According to Otunba Gani Adams ‘ It is heart breaking to learn about the exit of a special breed Yoruba man who displayed unalloyed personal commitment to integrative development initiative of Yoruba land . It is a tragedy not only for his family but the Yoruba race in particular” 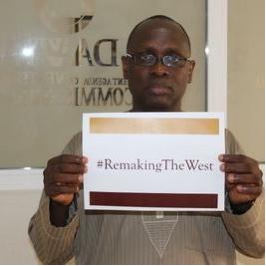 Otunba Gani Adams, National Coordinator, Oodua Peoples’ Congress, OPC and Global convener Oodua Progressive Union, OPU, made this statement in reaction to the news of the death of the late Famakinwa.

In a release made available to the press men, Otunba Adams said “It is a tragedy .It is sad that death has removed and cut down one of the most deeply intelligent and sound Yoruba young turks from our midst. Dipo Famakinwa was a prominent and accomplished Yoruba ICON who was diligent and thorough in his duty post. A wonderful son of Oduduwa who was blessed with a prodigious native intelligent laced with intellectual soundness. He was a man of yesterday, today and tomorrow combined. Honestly, death has not been fair to the Yoruba race’.

Otunba Adams described.“Mr Famakinwa was unique in deeds, acts and personal relations. He has this special interest in the development and unity of the Yoruba race and spent most of his life engaging in pro Yoruba development ventures without pecuniary consideration. Honestly, death has not been fair to the race”.

He sympathised with the family of the deceased and pray to God to give them the fortitude and forbearance to bear the lost of ‘one of the most vibrant Yoruba cultural developers”.

Otunba Adams called on the Governors of the South – West to immortalize the Late Famakinwa who has quietly done a lot of work on the integration of Yoruba state.

“I am using this opportunity to call on the governors of the South West not to let his death being the demise of his persons and works on the face of the Earth. Mr Famakinwa did his best for the region; we should immortalize him, not only for his person but to encourage others. We are missing him. May the Lord grant him eternal Rest! He was a useful personality for the West”.