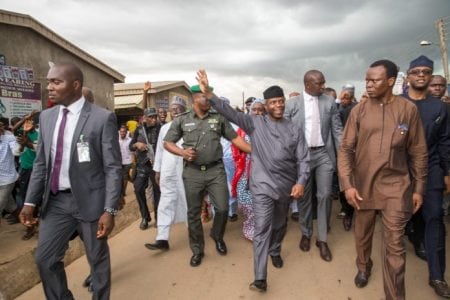 The Acting President, Prof. Yemi Osinbajo on Friday paid a surprise visit to the Garki Model Market, Abuja, during which he interacted with the traders and promised to look into some of the complaints raised by them.
According to the Acting President’s spokesman, Laolu Akande, the visit is part of the activities marking the second anniversary of the Buhari administration, and it was meant to interact with traders to get first hand information on the cost of goods and other food items in the market.
Osinbajo arrived the market at about 3:10 pm to the cheers of the traders who shouted “Osibaba, APC” and exited the market after about 40 minutes.
His visit attracted a large turnout of traders, shoppers and onlookers who besieged his motorcade to welcome him and his entourage to the market.
While pricing some food items including fish, onions, rice and beans, traders complained that the cost of renting shops was high. He interacted with a fish seller who sought government’s intervention to reduce the cost of the shop which was put at N250,000 per annum.
The fish seller also complained that the prices of locally smoked fish had gone high just as the imported ones had also skyrocketed.
Alhaji Nasiru Maiyaki Kuryfi, who trades on rice, complained of inadequate store space, lamenting that the market management had not been able to complete the shops they paid for long ago.
In his response, Osinbajo promised the intervention of government in the situation including the high cost of rent.
While encouraging the traders to also go into agriculture to enhance local production of food items, he said “The more we farm the more the cost of products will come down”.
The Acting President further pleaded with the traders to keep their goods at affordable prices especially at the time of Ramadan.
He was accompanied to the market by the Minister of State for Trade and Investment, Aisha Abubakar and other senior presidential aides.

Landlord Evicts Troublesome Tenant Over Too Much Noise During S*x!