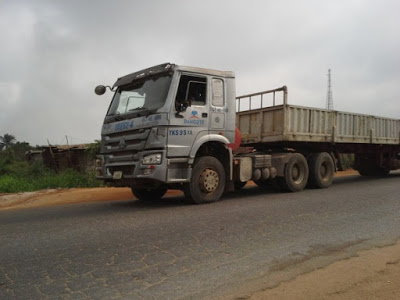 A truck, with registration number of the truck is DTF 118XA, belonging to Dangote Cement Company on Tuesday caused the death of three persons, while driving against traffic along Lagos-Ibadan Expressway.

The Commander of the Traffic Compliance and Enlightenment Corps‎, TRACE, Seni Ogunyemi, said the truck driver, who was driving on the wrong side of the road, rammed on pedestrians crossing the road at Arepo area, and killed three on the spot‎.

Mr. Ogunyemi said the driver has been arrested with the truck towed to a police station.

He said the corpses of victims have been deposited at the morgue of the Olabisi Onabanjo University Teaching Hospital, Sagamu.

In a related development, the Federal Road Safety Commission, FRSC, in Ogun State said it will deploy 770 of its personnel, as well as 25 patrol vehicles for the Easter Patrol operations across the state.

The Sector Commander, Clement Oladele, made this known in a statement. He said the Easter patrol will commence from April 13 to 18.

Other logistics including ambulances and emergency toll lines will also be provided, he said.

The denouement (the outcome of a situation, when something is decided or made clear)