The anniversary committee revealed that the celebration will be flaged off with the National and Historic Exhibition of an AA top level exhibition with the theme: “Nigeria through the Times” at the entrance foyer of the Abuja International Conference center on May 16 ,2017 from 3.00 pm till 6.00pm and at the Nigerian Institute of International Affairs (NIIA), Victorial Island Lagos, from June 1 to June 6, 2017.
The exhibition according to the release is aimed at bringing back to our memories, the vision and struggles of our founding fathers who laboured vigorously for the Nigerian Independence as exclusively documented by the Daily Times and retained in its very rich archives. 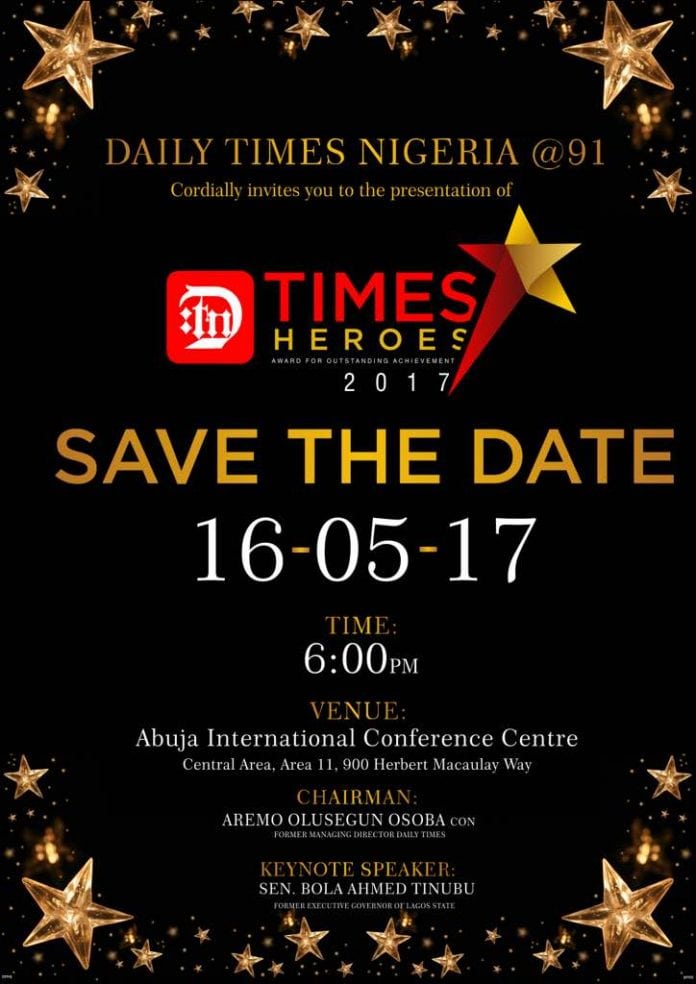 “The historic exhibition shall showcase the history of Nigeria viz a viz, the colonisation, the rise of Nigerian nationalism, pictoria exhibitions of historic constitutional conferences, emergence of political parties, the Nigerian independence pictures, the Daily Times first issue, June 1, 1926, the Daily Times independence edition, October1, 1960, land mark editorials of the Daily Times, photographs of the editors of the Daily Times publications and memorable front pages from Daily and Sunday Times,” noted the statement.
The Times Heroes Awards 2017, which comes as icing on the anniversary cake, will hold at the Abuja International Conference Center, conference hall from 6.30 pm on May 16, 2017. The Awards are instituted to honour deserving heroes who have distinquished themselves in various endeavours and whose activities have positively impacted lives. “A legacy the Times Nigeria has canvassed over the years.”
Heroes to be honoured this year include, President Muhammadu Buhari, who is being given Nnamdi Azikiwe Leadership Award, President Nana Akufo-Ado of Ghana with Babatunde Jose Leadership Award, the immediate past President of Nigeria, President Goodluck Jonathan to be honoured with Ernest Ikoli Leadership Award, and the Nigeria Senate President, Dr. Bukola Saraki, to be awarded with the Politician of the Decade Award.
One of the governors who will be honoured with the Governance award is Abia State Govervor, Dr Okezie Ikpeazu, Seven other governors – Mr. Akinwunmi Ambode (Lagos); Ibrahim Dankwabo (Gombe); Bindo Jubril (Adamawa); Nyesom Wike (Rivers); Willie Obiano (Anambra); Yahaya Bello (Kogi) and Atiku Bagudu (Kebbi), are also billed to recieve the Good Governance award during the event.
Governor Dankwabo is being honoured with the Governor of the Decade. Business icon, Mr Tony Elumelu, Chairman, Heirs Holding and UBA, will be crowned with Man of the Decade Award; Mrs Ibukun Awosika, Chairman, First Bank Plc, will be awarded Woman of the Decade while Pastor Paul Adefarasin, will bag Life Impact Award.
Others to be hourned include Pinnacle Communications Limited and Nigerian Media icons such as Nduka Obaigbena, John Momoh, Linda Ikeji, and Chris Ubosi.
This years Awards, the anniversary planning committee noted, is a consolidated award in that the last award by the Daily Times was 1996 when Daily Times marked her 70 years anniversary.
Henceforth, the Times Heroes Awards has now been instituted to be an annual award.
Notable icons of the Daily Times are Sir Adeyemo Alakija, Ernest Ikoli and Alhaji Babatunde Jose .
Others are late Chief Innocent Oparadike, Araba Tola Adeniyi, Tunji Oseni, Onukaba Adeniyi-Ojo and others.
“The event is expected to attract people from all walks “the promotion of humanitarian cause, such as the issues of the Internally Displaced Nigerians (IDPs).

Metronews Exclusive: Moji Olaiya Had Her Baby Dedication In Canada, And We Have The Details

May 27: Why early lesson on cashless is vital to child’s financial freedom, says Heritage Bank

May 27: Why early lesson on cashless is vital to child’s financial freedom, says Heritage Bank