0
SHARES
9
VIEWS
Share on FacebookShare on Twitter
The Nigeria Customs Service (NCS), Eastern Marine Command has donated bags of seized rice to Internally Displaced People’s (IDPs) Camps rather than auctioning them to the public.
The out-going Controller in charge of the Customs Eastern Marine Command with headquarters in Port Harcourt, River State, Comptroller Usman Bello Kankara stated this during a valedictory service in his honour organised by Head of Federal Government Agencies in Rivers State.
He disclosed that the Nigerian Navy assisted the Customs Command in intercepting boats laden with carefully concealed smuggled rice while sailing on the high sea.
Kankara said: “Apart from handing over the smugglers who were mostly foreigners to the Nigeria Immigration Service for further investigation, the National Emergency Management Agency (NEMA) was handed over the food items for onward distribution to IDPs.’’
He said that the constant synergy and inter-agency collaboration between his Command with military and other security agencies in the zone had yielded immeasurable results. 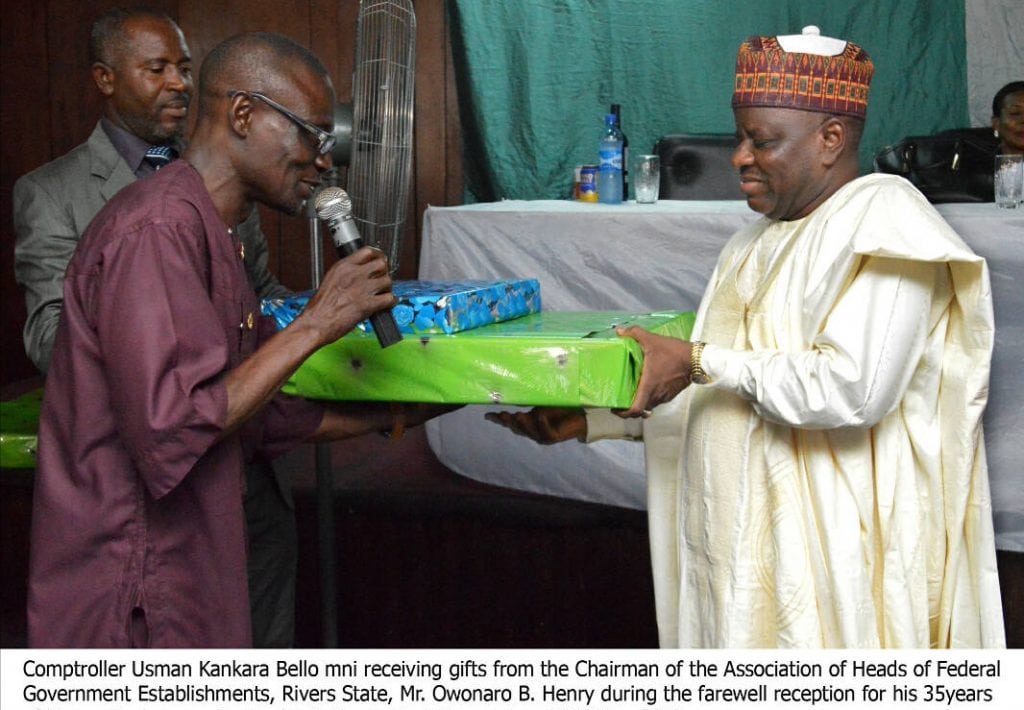 “The excellent collaborations of agencies in the zone with persistent onslaught on smugglers drastically reduced smuggling of prohibited items through the waterways. Intelligence sharing and synergy, especially in the riverine areas checkmated the activities of smugglers, pirates and pipeline vandals”, he said.
Recalling some of his achievements, the outgoing comptroller Kankara said the operatives of his Command intercepted and detained a vessel named ‘MV Defender V’ for sailing without a valid Bank Bond.
He said: “The vessel is a patrol vessel from South Africa, used in piloting tanker vessels. The 7-man crew vessel, however, had a temporary importation permit but no valid Bank Bond. We detained the vessel as a punishment for operating in Nigerian waters without Temporary Importation Permit and a Valid Bank Bond.”
He said the incidence compelled other ship owners plying the Nigerian territorial waters to always seek for Temporary Importation Permit from the Nigeria Customs Service and obtain the Valid Bank Bond before either approaching or sailing into Nigerian waters.
Comptroller Bello, a graduate of Ahmadu Bello University (ABU) reached the apex rank of Comptroller of Customs at the Service in 2009 after joining the service in 19982. He has also headed several Customs Area Commands including Kano, the Federal Capital Territory (FCT), and Sokoto among others.
Bello served as the Public Relations Officer (PRO) of Apapa Port and Tincan Island Commands and got the Best Public Relations Officer Award of the service by the Comptroller General of Customs (CGC) in 1999.
As Customs Area Controller of Kano Command in 2010, he received Certificate of Commendation from the CGC when he surpassed the revenue target with a wide surplus .
The outgoing Comptroller Bello was conferred with the traditional title of Kanwan Katsina (Warrior) in November 2000 by the late Emir of Katsina, HRH Alhaji Kabir Usman CFR.
Previous Post

AGF to Institutes Award for Best Graduating Student in Accounting