by metronews
in Entertainment, Event, News
0 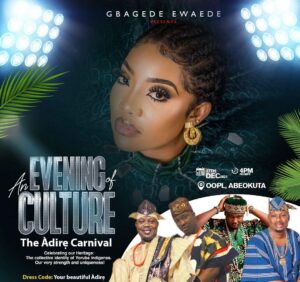 Gbagede Ewaede foundation is set to honour the former president of the nation, Chief Olusegun Obasanjo, the Ogun State Governor, Prince Dapo Abiodun, Ooni of Ife, Oba Enitan Ogunwusi and other dignitaries for their unrelenting efforts in the promotion of Adire fabrics.

The foundation according to a release signed by its Convener, Princess Adejoke Somoye was to bestow the award on the luminaries as part of its activities marking her tenth anniversary of promoting the aesthetics of Yoruba society -its cultures, norms and tradition.

The release added that the anniversary with the theme: “Celebrating our uniqueness as Africans” would hold at Olusegun Obasanjo Presidential Library, Abeokuta, Ogun State on Monday, 27th December, 2021 by 4:00pm prompt