COVID-19: Censors Board seals off illegal Drive-in Cinemas in FCT 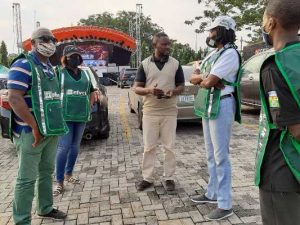 Mrs Bola Athar, Director of Operations of the NFVCB, made the disclosure to the News Agency of Nigeria (NAN) on Tuesday in Abuja.

A drive-in cinema or theater is a cinema structure consisting of a large outdoor movie screen, and a parking area where customers can view movies from the privacy and comfort of their cars.

According to Arthar, the illegal drive-in cinemas are  operated by some showbiz promoters and recreational spots owners.

“Through our intelligence gathering efforts, we understand that films are being exhibited to the public for commercial purposes in these centres as drive-in cinemas.

“These recreational centres and their promoters are not licensed exhibitors and the venue they are using are not approved by the board for exhibition, which is  a contravention of relevant sections of the NFVCB Act .

“As regulator of the motion picture industry, we have sealed off some drive-in cinemas in the FCT within this week , including the one at the Central Park, until the right thing is done,” she said.

Athar explained that, for a film to be allowed for exhibition in Nigeria, it must be censored, classified and the exhibitor as well as the premises for its exhibition licensed.

NAN reports that the NFVCB is a Federal Government body that regulates the films and video industry, and is empowered by law to classify all films and videos whether imported or produced locally.

It also register all films and videos outlet across the country and keep record of all registered outlets, among other functions

NAN reports that a drive-in cinema is now a growing trend in the entertainment industry globally, as traditional movie theatres remain closed because of the COVID-19 pandemic.(NAN)

BBN 2020:Erica goes on to confess how she Betrayed Laycon (Video)

BBN 2020:Erica goes on to confess how she Betrayed Laycon (Video)