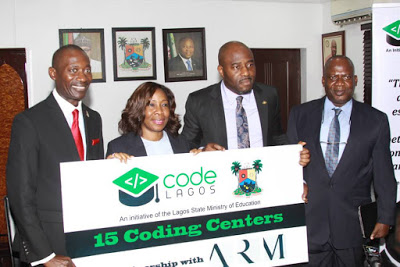 The Lagos State Government is set to train 1000 facilitators as part of preparation towards the official launch of “CodeLagos” programme in April 2017.

The Special Adviser to the State Governor on Education, Mr. Obafela Bank-Olemoh disclosed this on Thursday at the commencement of a Three-Day training session for Master Trainers.

He explained that the programme aims to equip One Million Lagosians with coding skills by the year 2019, in line with the vision of Governor Akinwunmi Ambode to position Lagos as the technology frontier in Africa.

Mr. Obafela Bank-Olemoh noted that the ongoing training of Master Trainers would equip1000 trainees with the required knowledge and skills to teach students the coding programme, adding that the participants were selected following a rigorous screening exercise carried out in March 2017.

According to him, “These Master Trainers will go on to train over 1,000 CodeLagos facilitators who will eventually be deployed to different coding centres across the State. In this way, CodeLagos will create employment and business opportunities for Lagosians in the technology sector.”

In his remarks, the State Commissioner for Science and Technology, Mr. Femi Odubiyi reiterated the commitment of the State Government to develop a tech-driven economy, adding that CodeLagos will soon be launched with a roll out of coding centers across 350 public and private schools as well as public libraries in Lagos.

He also highlighted the contribution of the private sector to the CodeLagos project, applauding the support of SystemSpecs, ARM, PricewaterhouseCoopers, Etisalat, Oando Foundation and Oracle Academy and others that have promised to set up clusters of coding centres across the State.

Also speaking at the event, the Executive Director of SystemSpecs Limited, Mr. ‘Deremi Atanda, expressed the continued commitment of his organization to support the laudable initiative of the Lagos State Government, emphasizing that, “The greatest asset of a State like Lagos is its large youth population. The choice to empower them is the wisest decision the State Government has made, by laying a good foundation for the emerging knowledge economy. We are convinced that CodeLagos would do just that.”