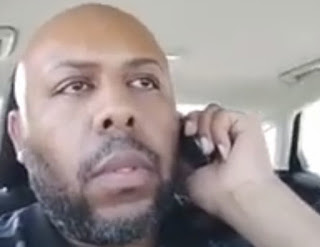 A crazy story is unfolding in Cleveland. An alleged serial killer is murdering people, and Livestreaming their deaths.

Here is the video:

Here is how it is being reported.

Police in Cleveland are searching for a man they said broadcast a
killing on Facebook Live and who claims to have killed other people,
police said Sunday.
The man, named Steve Stephens, is considered armed and dangerous,
according to a Cleveland Police Department statement. He is driving a
white- or cream-colored SUV and wearing a dark, striped polo shirt.
The homicide that’s been confirmed took place at 635 E. 93, police said.
A video posted Sunday to a Facebook account apparently belonging to
Stephens — the user’s name is listed as Stevie Steve, and a city
representative confirmed it belongs to him — shows the man filming walk
up to an older man and, after asking him a question, shooting him. The
video, which was posted about 2 p.m. ET and was later taken down, is
captioned, in part, “Easter day slaughter.”

Here is another video:

This Is How MOAB Looks Like From The Ground When Dropped!

This Is How MOAB Looks Like From The Ground When Dropped!