Chelsea Crowned Champions As Arsenal Miss Out On Champions League 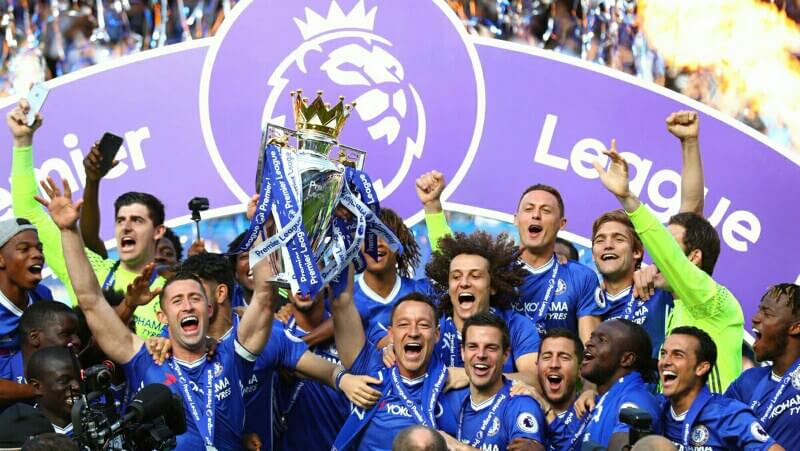 The English Premier League ended in style on Sunday as Chelsea ended the season on a high, beating Sunderland 5-1.
Sunday’s win was the 30th for the Blues and it is a record number for the London club in a single season.
Javier Manquillo surprisingly shot the hosts in front when he struck three minutes into the game. However, Chelsea gave a perfect response as Willian scored the equaliser in the 8th minute.
The already relegated Black Cats were trying to prove stubborn and were able to hold the champions to a stalemate in the first half.
While Sunderland had it going for them in the first 45 minutes, it was a different ball game in the second half as Chelsea pumped in four goals to end the season on a high with 30 goals.
Eden Hazard, Pedro Rodriguez and a late brace from Michy Batshuayi saw Chelsea cruising to another win that confirms that the Blues are worthy champions indeed.
In the other part of London, there was heartache for Arsenal as the Gunners for the very first time in a long while failed to qualify for the Champions League.
Alex Iwobi came off the bench to put in a good shift a for a ten-man Arsenal who despite beating Everton 3-1 on the final day of the Premier League have missed out on Champions League football next season.
Goals from Hector Bellerin and Alexis Sanchez gave Arsenal a two-goal lead over Everton at half time; but the Toffees returned after the break to halve the deficit after Romelu Lukaku beat Petr Cech from the spot.
Wenger’s men restored their lead in the closing stages with a super curling effort from Aaron Ramsey but with Liverpool winning against Middlesbrough and City beating Watford, Arsenal are out of the race for a place in next season’s Champions League.
Full results
Arsenal 3 – 1 Everton
Burnley 1 – 2 West Ham United
Chelsea 5 – 1 Sunderland
Hull City 1 – 7 Tottenham Hotspur
Leicester City 1 – 1 AFC Bournemouth
Liverpool 3 – 0 Middlesbrough
Manchester United 2 – 0 Crystal Palace
Southampton 0 – 1 Stoke City
Swansea City 2 – 1 West Bromwich Albion
Watford 0 – 5 Manchester City