Akinwunmi Adesina extols Gowon in defence to UK MP’s allegation of CBN looting during his reign.

It is no longer news he has been accused by a British MP of being behind, arguably, the greatest theft of public funds ever witnessed by the country. But in his opinion, Adesina advised that people be circumspect in believing what has been said about the former Commander in Chief.

Be careful of misinformation! H.E. General Yakubu Gowon, Nigeria’s former Head of State, is a man of great honour, decency, honesty, amazing simplicity, humility and integrity. I know him. A great and admirable elder statesman of Nigeria. His honesty and integrity are impeccable. 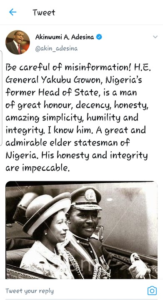