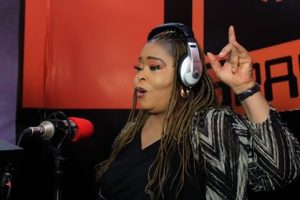 Nollywood actress, Yeye Toyin Adegbola, popularly known as ‘Ajoke Ashewo to re Mecca’ has strongly recommended castration as the appropriate punishment for rapists in Nigeria.
The veteran actress made her position known while featuring on Space FM Ibadan’s programme, Parrot Xtra Hour on Radio anchored by Olayinka Agboola on Tuesday.
Speaking on probable solutions to rape, she stressed the need for mothers to establish closer relationships with their children, particularly the girl child, without shying away from adequate sex education.
The thespian while still speaking on parental duties highlighted the need to prioritize children as her reason for refusing to get married again since her husband’s demise, over 20 years ago.
She further admonished parents to always encourage and support their children in their desired career choices.
When quizzed about her stage name, the actress laughed, explaining that she got it from a role she acted in a movie.
“There was a time I went to buy some things at Dugbe Market in Ibadan and a particular woman started shouting ‘Ashewo’, you know, it was so embarrassing. I found it offensive initially but I just had to get used to it eventually. Besides, this is what I’m getting paid for”.
She attributed her seeming absence in movies in recent times to growth, explaining that she now carefully selects roles before accepting to feature in movies.
While speaking on other means of livelihood, the actress disclosed her involvement in politics at a time, noting that the Osun state Governor at the time, Ogbeni Rauf Aregbesola had invited her to serve the people, because of her many social responsiblity roles even as an actress.
On upcoming projects, she assured her fans of exciting projects as soon as the pandemic is over, one of which would capture her most embarrassing moment, when she was detained at Iyagunku, Ibadan police station for about nine days, after the police alleged that her vehicle was used to assassinate somebody.
The actresses and actors warned rising actors to be willing to undergo intense training, adding that there is no shortcut to long lasting success.
Yeye Toyin Adegbola also took time to speak about her role so far in getting Nigerians to be aware of the deadly nature of the novel coronavirus pandemic.
Her words “I have several short productions that I uploaded to sensitize Nigerians on COVID-19. Nobody paid me to do it. Nigerian governments at all levels, as far as I am concerned has not approached any actor or actress to officially have input in the battle to stop the spread of the pandemic.”
She later went ahead to pay glowing tributes to Pa Tubosun Odunsi and Adebayo Bello (Oga Bello) for the roles they played in her life and for contributing to her success as a professional actress.

The Federal Government submits proposed guidelines for the re-opening of schools to the National Assembly.

The Federal Government submits proposed guidelines for the re-opening of schools to the National Assembly.