Dr. Adeyemi Dipeolu, an economic adviser in the administration of President Muhammadu Buhari, is threatening legal action against the International Centre for Investigative Reporting (ICIR), over the occupier of the Office of Chief Economic Adviser to the President (OCEAP).

The story began with the paper’s interest in the budgetary allocations to the OCEAP, and whether the funds were utilized for the specified purposes.

The OCEAP had received a sum of N34 million in 2017 to fund research studies on the economy, but it has so far failed to make this research available.

Conversely, in the 2017 budget, the total capital cost for the office was N60 million, with every penny going into research and development. The budget had specifically stated the project title as: “Provision of evidence-based research studies on all aspects of the Nigerian economy that will help Mr. President in formulating sound strategies and policies.”

A document obtained from the office of the Accountant-General of the Federation stated cash releases to all government bodies, with N35 million given to OCEAP as part of the first batch of releases. However, more than six months since the 2017 budget implementation period ended and over a year since money was released for the research project, the studies are nowhere to be found.

When ICIR contacted Dipeolu for explanations regarding the funds, he did not expressly state at first that he wasn’t the CEAP. But he did say that the budget item ‘OCEAP85893258’, about which clarification was being sought, was “not under the Special Adviser to the President on Economic Matters in the Office of the Vice President”.

But when asked to name the CEAP or the official acting in that capacity, Garba Shehu, President Muhammadu Buhari’s official spokesman, had just one answer for the paper: “Dr. Adeyemi Dipeolu.”

Shehu’s answer looked the more plausible of the two, given that the Nigerian Television Authority (NTA), the government-owned broadcaster, had reported on August 10, 2016, that Buhari swore in Dipeolu as “Special Adviser on Economic Matters”.

To Laolu Akande, the VP’s spokesman, the matter is not that straightforward. “You are saying because Mr Shehu told you that Dr Dipeolu is the ‘Chief Economic Adviser’ when his title says he is a ‘Special Adviser. So, if somebody told you too that I’m the Minister for Information, you’ll just believe it because he said it,” Akande had told the paper. 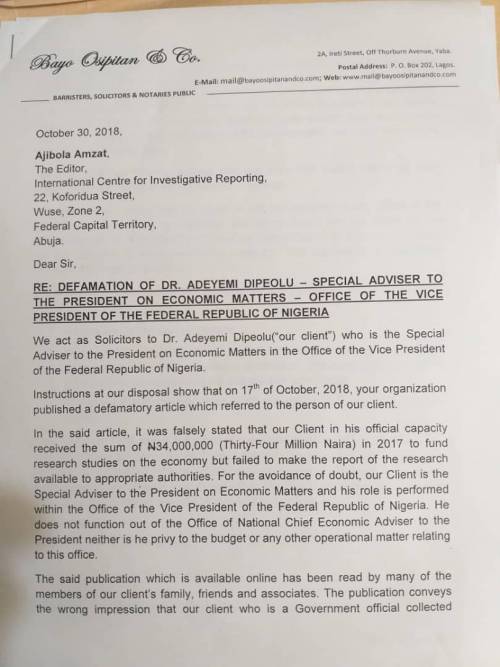 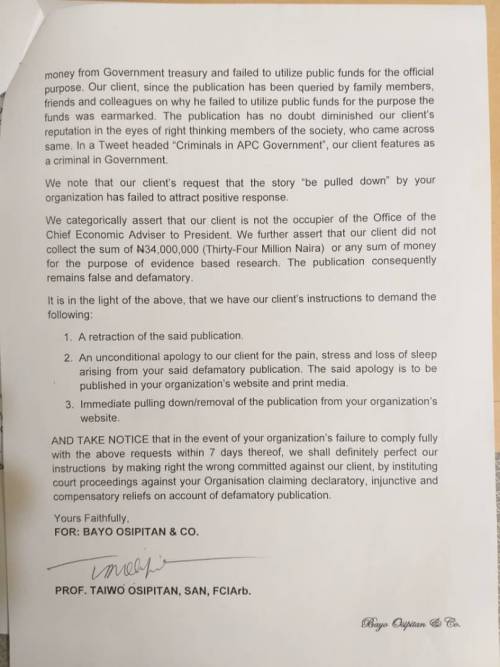 Dipeolu has threatened legal action against the paper for holding him responsible for the funds. A letter from his lawyers to the paper, obtained by SaharaReporters, reads: “We act as Solicitors to Dr. Adeyemi Dipeolu (‘our client”) who is the Special Adviser to the President on Economic Matters in the Office of the Vice President of the Federal Republic of Nigeria.

“Instructions at our disposal show that on 17th of October. 2018, your organization published a defamatory article which referred to the person of our client.

“In the said article, it was falsely stated that our Client in his official capacity received the sum of N34.000.000 (Thirty-Four Million Naira) in 2017 to fund research studies on the economy but failed to make the report of the research available to appropriate authorities. For the avoidance of doubt. our Client is the Special Adviser to the President on Economic Matters and his role is performed within the Office of the Vice President of the Federal Republic of Nigeria. He does not function out of the Office of National Chief Economic Adviser to the President neither is he privy to the budget or any other operational matter relating to this office.

“The said publication which is available online has been read by many of the members of our client’s family, friends and associates. The publication conveys the wrong impression that our client who is a Government official collected money from Government treasury and failed to utilize public funds for the official purpose. Our client. since the publication has been queried by family members. friends and colleagues on why he failed to utilize public funds for the purpose the funds were earmarked. The publication has no doubt diminished our client’s reputation in the eyes of right thinking members of the society, who came across same. In a Tweet headed “Criminals in APC Government”, our client features as a criminal in Government.

“We note that our client’s request that the story “be pulled down” by your organization has failed to attract positive response. We categorically assert that our client is not the occupier of the Office of the Chief Economic Adviser to President. We further assert that our client did not collect the sum of N34.000.000 (Thirty-Four Million Nalra) or any sum of money for the purpose of evidence-based research. The publication consequently remains false and defamatory.”

He is demanding a retraction of the said publication, an unconditional apology “to be published in your organization’s website and print media” and immediate pulling down/removal of the publication from the ICIR website within seven days, without which court proceedings would be instituted against the paper.

While Dipeolu’s grievances may or may not be an issue to be decided by the court, there is a more important matter that he, Osinbajo, Buhari or anyone else in government must answer: If Dipeolu is not the CEAP, then who is? Who is that person that should be held responsible for the hundreds of millions of naira released, without accountability, to the OCEAP since 2017?