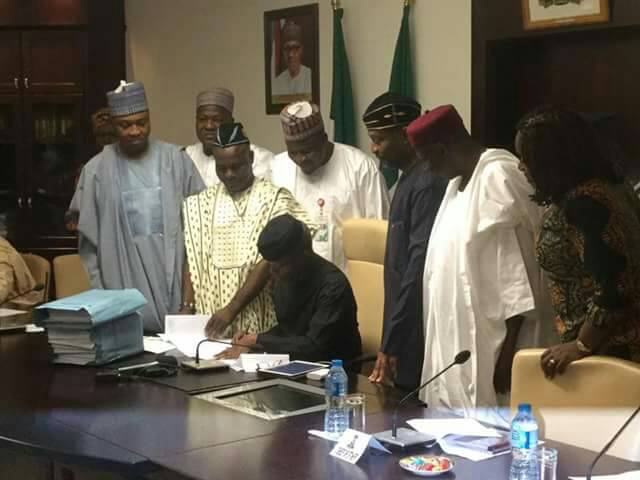 The Presidency said Monday President Muhammadu Buhari had indicated to Acting President Yemi Osinbajo to proceed to assent to the nation’s 2017 budget.
“Following the receipt of a full brief on the 2017 Appropriation Bill as passed by the National Assembly, and to buttress the unity at the highest level of government, President Muhammadu Buhari has indicated that it is in the interest of the nation’s economy for the Acting President, Professor Yemi Osinbajo, to sign the Appropriation Bill into law,” Garba Shehu, the senior special assistant to the president on media and publicity, said in a statement emailed to PREMIUM TIMES.
“In a letter dated June 10, 2017, which he personally signed and addressed to the Minister of Budget and National Planning, Senator Udoma Udo Udoma, the President also said he was “pleased by the joint resolution that the Executive would submit next year’s budget proposals by October 2017 and the National Assembly will conclude the Appropriation process by December 2017, so that the country can return to a normal fiscal period from next year onwards.”
There are indications Mr. Osinbajo is set to sign the budget into law today (Monday).
Our correspondent said the signing ceremony will take place in the conference room of the Vice President’s office in the Presidential villa Abuja by 4p.m.
Mr. Osinbajo is currently in Awka, Anambra State.
However, the venue of the signing ceremony is already being prepared ahead of his return.
Mr. Osinbajo had on May 19 received the N7.441 trillion budget passed by the National Assembly.
Initially, there were controversies over whether he or President Muhammadu Buhari, who is away in London for medical treatment, would assent to the document.
But the acting President’s spokesperson, Laolu Akande, cleared that doubt on May 18 when he said Mr. Osinbajo would sign the bill once satisfied with its content.
“Just so we are clear: when the time comes, everything is set, and he is satisfied, Ag. President Yemi Osinbajo will assent to the 2017 Budget,” Mr. Akande tweeted at the time.
The National Assembly had last passed the budget, increasing the total sum by N143 billion compared to what was sent by President Muhammadu Buhari.

At 50, the International Institute of Tropical Agriculture (IITA) expands research investment with the inauguration of 205.5 ha research farm

Overcoming Crises In Marriage (I)

Overcoming Crises In Marriage (I)