British drug trafficker tries to smuggle 70lbs of pure cocaine worth £4.5m out of Peru

This is the moment an elite squad of Peruvian anti-drug cops nabbed a Brit with 32kg of pure cocaine paste stuffed into a suitcase.

Cops claim that Sean Woods, 24, was caught “red-handed” with the drugs – thought to have a street value in excess of £4.5m.

A spokesman for Peru’s Ministerio Público said: “Caught red-handed, an English citizen was arrested carrying around 32 kilos of brick-type cocaine hydrochloride, which he intended to take out of the country.

“He was carrying 31 Brick-type packages containing cocaine hydrochloride which were hidden inside a blue trip suitcase.

He was then handed over to the infamous Peruvian federal police – which was in 2016 caught running a secret network of anti-drug DEATH SQUADS.

He is being held on suspicion of drug trafficking. 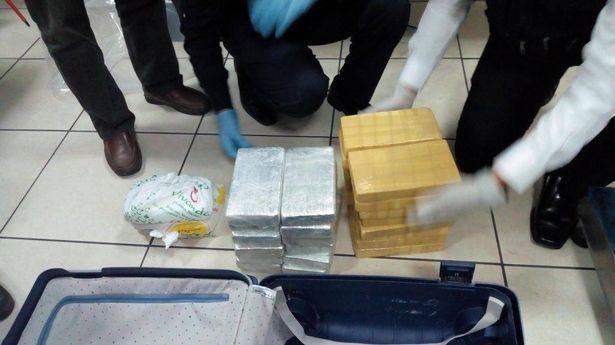 An FCO spokeswoman said: “We are providing consular assistance to a British national arrested in Peru and are in contact with the local authorities.”

In 2013, Michaella and Melissa Reid were arrested for smuggling cocaine at Jorge Chavez International airport in Lima, Peru.

McCollum was as a part-time model and a nightclub hostess in Ibiza while Reid was a sales assistant back in her home country.

They were caught by customs officers carrying cocaine ahead of a long-haul flight to Spain.

The girls claimed they had been forced to carry the drugs by an armed gang.

Why I Celebrated Becoming A US Citizen —Laide Bakare