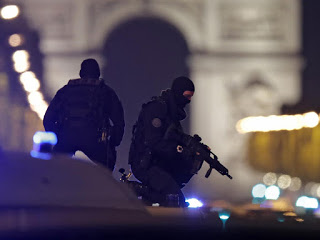 Isis has claimed responsibility for the shooting attack in Paris that has left one police officer dead and two seriously injured.

In a statement from its Amaq news agency, the extremist group gave a pseudonym for the shooter indicating he was Belgian.

The claim of responsibility came unusually swiftly for the group, which has been losing territory in Iraq and Syria.

The French interior ministry said it was too early to tell what the motive was for the attack in the Champs-Elysees but President Francois Hollande said he was convinced it was a terrorist attack.‌

An emergency meeting of security, defence and intelligence officials would be held on Friday, he said in a televised statement.

Mr Hollande said: “We shall be of the utmost vigilance, especially in relation to the election.”

A counter-terrorism investigation has been opened and police officials said the suspect, who was killed by officers, had previously been flagged as an extremist.

Pictures of some affected places at KWHA