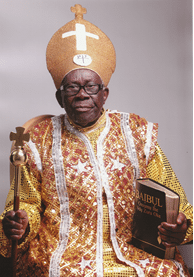 Elder Lazarus Anuba Onyeleonu was born on July 10th, 1925 to Mr Alaeto Onyeleonu and Mrs Ruomara Onyeleonu of Umuonyia village, Nkpologwu in Aguata Local Government Area of Anambra State, Nigeria.
He started his primary education at Central School, Achina in 1934 and later transferred to Ekwulobia Central School in 1937.  While in School, he was a great sports person.  He was involved in football and track events particularly, the 440 and 880 yards as it was then known and he excelled in all of them.
In 1942, he went to Asaba, now in Delta State, to learn a trade having lost his father earlier in 1936 and 1947 he moved back to Onitsha to open his own business.  He did well in business that by 1949, he had opened many business outlets.
Elder L A Onyeleonu started his Christian life as an Anglican at Emmanuel Anglican Church, Nkpologwu and when he got to Onitsha, he continued in the same faith at St. Andrew AnglicanChurch, Odoakpu, Onitsha and in 1947, he was among the six persons selected to be trained as Lay Readers.
He joined the Cherubim and Seraphim Organization in 1948 at Aba and never looked back.  He played prominent role in establishing many branches in the Eastern and the mid-Western part of Nigeria, particularly, he played prominent role in the founding of the following branches:  Oguta 1,  Owerri, Aba, Ibagwa in Nsukka, Umuahia, Ohafia, Port-Harcourt, Diobu (then in Akokwa Street), Orlu, Oba, Ogbunike, Nteje, Warri, Agbor, Umunede, Calabar, Nkpologwu etc.
In 1950, he was ordained to the rank of Aladura, Leader (1951), Senior Leader (1952), Rabbi (1953), Pastor (1954), Evangelist (1955), Apostle (1956), and Senior Apostle (1958).  He has always been involved in Spiritual work and had supervised a lot of healing and other spiritual work wherever he stayed to worship.
Elder Onyeleonu for many years led the Eastern elders of the Holy Order to the Annual General Conference in Lagos.  He was the premier Chairman of Central Management Council 2 (CMC 2) comprising of all the provinces in the East, South South region. This position he held till 1986 when he was called up to Lagos by the late Baba Aladura G. I. M. Otubu.
On the 13th of September 1986, he was ordained Supervising Apostle General by the late Baba Aladura G. I. M. Otubu.  Then on 4th of December 1991, he was ordained Deputy Baba Aladura, the position he held till December 12, 2010 when he was unanimously appointed the Baba Aladura and Prelate of the ESOCS worldwide by the Advisory Board.
Elder L. A. Onyeleonu was married and blessed with children and grand children.
May his soul rest in peace.
Additional materials gathered from here.
Previous Post