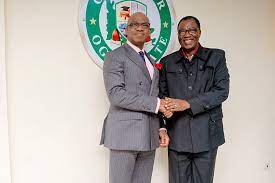 The current relationship between the duo of the current Ogun State Governor, Prince Dapo Abiodun, MFR and a former Governor, Otunba Gbenga Daniel, reminds me of the popular quote from Abraham Lincoln; ” .. _.a house divided against itself, cannot stand.”_

I chose to write this peace as a political analyst/observer and could thus be taken as being apolitical.

As a brief background, it was a public knowledge that Otunba Gbenga Daniel, shortly after he left PDP for APC, stood by his political Brother, Prince Dapo Abiodun to win the Gubernatorial election. I remembered to have followed a very good friend of mine to the Sagamu Conference Hotels of Otunba Gbenga Daniel to celebrate the announcement of the election result won by Prince Dapo Abiodun with a narrow margin of less than 20,000 votes to the next Candidate.

Fast forward, their relationship has been very cordial as I could remember Prince Dapo Abiodun being instrumental to the release of the Abeokuta Conference Hotels construction which was then halted by Abiodun’s predecessor, Sen. Ibikunle Amosun for reasons best known to him. In return, Otunba Gbenga Daniel too has openly identified and have been lending his weight for Prince Abiodun towards a successful administration.

However, as Prince Dapo Abiodun is gradually ending his first term and as expected, warming-up to have a second term, Otunba Gbenga Daniel too has shown interest in the Ogun East Senatorial seat, come 2023.

These separate interests seemed to have being the crux of a stained relationship that is showing up between these two politicians and as currently being discussed in the public.

As the determinant of who takes a ticket within a State political structure in Nigeria, the Governor, Prince Dapo Abiodun’s body language is being read not to favour his Benefactor and political Brother, Otunba Gbenga Daniel at being the preferred Candidate for the Ogun East Senatorial District under the APC, a situation that is already tearing their relationship apart as well as those of their followers.

Analysts are of the opinion that while Prince Dapo Abiodun may have the party structure with him, Otunba Gbenga Daniel on his part, wields a very strong influence and control not only within the Ogun East, but across the State. The love for ‘OGD’ as he is popularly known, is overwhelming and to the extent that it is very doubtful if there is any Candidate that can match his popularity in Ogun State. No doubt, he is well loved for his unprecedented achievements during his eight years administration as the Governor of the State.

Prince Dapo Abiodun as a sitting Governor and as someone seeking a second term, would have ordinarily leverage on the general acceptability of Otunba Gbenga Daniel to create a strong synergy to send fears to the opposition but regrettably, the reverse is the case at the moment.

It is being rumoured that Prince Dapo Abiodun’s projection is that giving the senatorial ticket to Otunba Gbenga Daniel now may not avail him the opportunity to also contest for the same seat in 2027 after the end of his second term as Otunba Gbenga Daniel too may also wish to go to the upper chamber for the second time. An interesting and futuristic political calculation, one may call this.

The main questions begging for answers now are; if Governor Abiodun chose not to favour Otunba Gbenga Daniel in his Senatorial bid, what are the consequences for his own second term considering Daniel’s strong hold in Ogun East? What will be the options for Daniel? Will he succumbed to the on-going pressures from PDP for him to return and have his ticket on a platter of gold?

It is hoped that the forthcoming convention of their APC party will bring a clearer indication on the next steps at resolving the current impasse between the two such that Abraham Lincoln’s ” _divided house”_ will not further come to play within the Ogun APC family where all have not being well.

_Sola is a political analyst_.