Our correspondent reports that the gunmen suspected to be herders on Tuesday, April 24 attacked the worshippers while they were observing the 5:30am mass at St. Ignatius’ Catholic Church in Mbalom rural community of Gwer East. 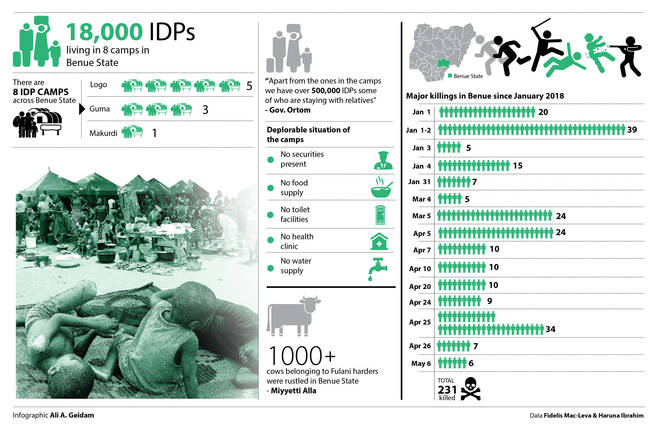 The deceased clergies; Rev. Fathers Joseph Gor and Felix Tyolaha, were interred alongside the 17 other parishioners at about 2:30 pm yesterday amidst tears and grief from their families, Catholic faithful across the state and beyond as well as people of the state.

Vice President, Yemi Osibanjo who spoke at the funeral, consoled the Catholic Church as he reiterated the determination of the Federal Government to ensure that justice is served to victims of attacks across the country.

Osibanjo noted that the attacks, killings and destruction of communities by criminal elements had began a long time now in the country, adding that the government would rebuild those affected communities.

Also, Governor Samuel Ortom disclosed that at least 492 people have so far been killed since New Year just as over 175,000 displaced people are languishing at the various camps across the state.

Ortom emphasised that the ranching of livestock was the only way to end farmer/herder crisis in the state as he called for the arrest and prosecution of leaders of Miyetti Allah Kautal Hore who he accused of masterminding the killings.

The governor however hailed President Muhammadu Buhari for approving the ongoing military operation in the state against the perpetrators of evil killings and expressed hope that the attacks would soon end for the displaced people to go back to their communities.

In a similar vein, the Tor Tiv, Prof. James Ayatse enjoined the people to remain prayerful, united and vigilant so that the plans of the enemy to overrun Benue and take over the land would not be realised.