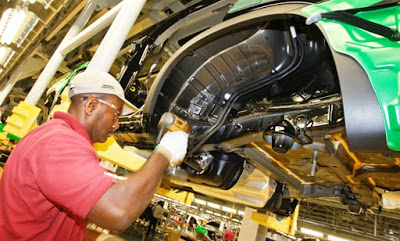 The automobile industry across the globe has always played a major role in strengthening the global economy by contributing immensely to the growth of the GDP and the creation of employments to teeming youths. Nigeria, as a country, despite being a huge market in Africa with a beaming population of over 170 million people, the country is yet to fully actualize the potentials of the automobile industry owing to the overwhelming influx of imported used cars turning the country into a dumping ground and one of the leading collectors of junk aged cars.

The ban on used cars from the land borders was greeted with mix feelings, however, the incontrovertible effect of this ban is the positive impact on the growth of the industry through the backward integration, provision of employments and setting up of other ancillary manufacturers in the industry. Prior to the decadence in the industry ushered in by the unabated influx of used cars, Nigeria used to be a hub for the automobile industry in West Africa with made in Nigeria cars. However, due to economic instability occasioned by unstable policy by the governments, the industry was brought to its knees and stayed too long in the murky waters of ‘Tokunbo’ cars thereby running the hitherto viable industry aground.

In the advent of the new auto policy, there was a palpable fear from the stakeholders due to the previous instability of economic policies in the country. The fear was heightened following a change in government, however, the current administration not only upheld the policy but further strengthened it to help grow the local industry and diversify the economy from an import dependent to an export-oriented economy.

The need to grow the economy can’t be overemphasized and the change of customer preference at this phase of the nation’s economic development is of utmost significance. The policy has begun to yield quite a number of gains as local manufacturers are now producing made in Nigeria cars notable among these cars is the Kia Rio. The Kia Rio, dubbed ‘The People’s Car’ has been a true reflection of innovative stride in the automotive engineering and was adjudged the best in its class with the top of the segment features it brings to the fore.

Its affordability, low cost of ownership and high performance sets it apart from its peers and remains the best option to both the imported used cars and other new cars in its segment. A subcompact car with high-quality design, responsive 6-speed transmission and a decent powertrain, the stylish Kia Rio’s design is streamlined and powered to perfection to strike attention on Nigeria roads and give a smooth drivetrain on the go.

Tailored to the preference of the Nigerian customers, the Kia Rio is sporty and yet roomy with a generous cargo space. As a truly made for Nigeria car, the Rio darts across the city, over speed humps and across lumpy surfaces, and always feels firm but comfortable, and well controlled. In terms of the drive and its spacious interior, the Kia Rio remains largely impressive.

Sequel to the production of made in Nigeria cars and its resultant positive outlook on the growth of the country’s GDP, it’s safe to state that the ban on the imported used car will not only rid our roads of heavy pollutant vehicles but help grow our economy by making it a manufacturing hub in Africa. The warranty on new cars will also help protect the interest of car owners in Nigeria, hence, the Kia Rio remains the only preferable option as it’s not only tropicalized for the country but also offers the longest warranty cover for a car, 5 years.