It has been reported that the operatives of the Federal Special Anti-Robbery Squad (FSARS), Abeokuta in Ogun State, on Thursday, May 31, 2018, recorded a triumphant victory over a gang of cross-border bandits after a gun battle. During the fire fight, a member of the syndicate was killed by the police bullet while others scampered for safety in different directions.

According to Crime Puzzle, it was gathered that a team of FSARS operatives, attached to Sango-Otta area and led by Supol Bawa Sanni, had received an order from their boss, DSP Uba Adams, as directed by the state Commissioner of Police, CP Ahmed Iliyasu, to track down the bandits who had earlier snatched a Lexus 350 Jeep at Oke-Ilewo in Abeokuta, the state capital.

The hoodlums were ostensibly heading towards neighboring Benin Republic when they ran into a brick wall in the FSARS operatives on Sango-Idiroko Road.

Apparently bent on escaping with the vehicle, they opened fire on the policemen, but were subdued by the retaliatory and gallantry efforts of the officers.

The fatally injured member of the gang was taken to the State Hospital Ijaye, Abeokuta where he finally gave up the ghost. His corpse was consequently deposited at the hospital’s mogue.

The snatched jeep and an AK 47 rifle, as well as 13 live ammunition were recovered from the robbers.

“Meanwhile, the Commissioner of Police, CP Ahmed Iliyasu, who expressed his satisfaction about the performance of his men, has ordered a serious manhunt for the fleeing members of the gang. The CP also assured residents of the state to always alert the police on time whenever any crime is being committed in their area to enable the police respond as quickly as possible”. 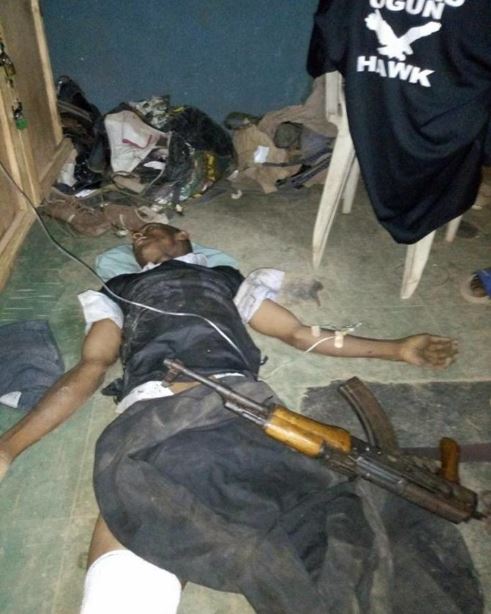 They all want a piece of me, lady slams Mr Eazi, Davido, Kizz Daniel sliding into her DM