by metronews
in Breaking, Politics
0 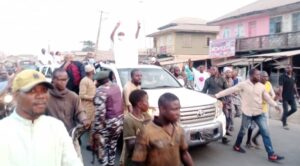 Minister of Interior, Rauf Aregbesola, was on Monday, attacked by some suspected thugs who attacked his convoy during a road show he conducted in Osogbo, capital of Osun State.

The gun-wielding hoodlums, suspected to be political thugs, waylaid his convoy and started shooting in a bid to scare away the former governor of the state and members of his entourage.

The Point’s correspondent had walked into the convoy of Aregbesola at Orita-Gbaemu area of Osogbo around 5:30pm and sighted the Minister standing on his open roof vehicle and waiving at large crowd of residents who were hailing and jubilating at seeing their former governor.

Aregbesola continued his demonstration amid singing by his followers. Some were screaming “Sheu” as others were waiving brooms. The road show pulled so much crowd that there was traffic snarl along the Gbaemu-Idi-Seke road.

But pandemonium broke when Aregbesola got to Orisunbare market, close to Old-Garage when sounds of gunshots rented the air.

Jubilant residents who were following Aregbesola scampered for safety to escape being hit by stray bullet.

A team of combined security operatives from the Nigeria Security and Civil Defence Corps, Nigeria Immigration Service and Department of State Security, who were among Aregbesola’s convoy, stepped down from the vehicles and started shooting in a bid to scare away the armed thugs.

For about twenty minutes, Old Garage Area was thrown into panic as traders and road users ran helter-skelter as a result of resounding gunshots from the thugs and security operatives.

Amid this melee, Aregbesola was still standing on his open roof car, apparently unperturbed. The security personnel were able to overpower the suspected thugs who later fled before the Minister’s convoy had its way through the Dugbe/Igbona Area of the state capital.

Aregbesola suffered the attack few hours after he openly declared that the former Secretary to the State Government, Moshood Adeoti, is the next governor of the state.

A statement signed and issued by Sola Fasure, the Media Adviser to the Minister and made available to news men in Osogbo, quoted Aregbesola as saying that “the party is back in the hands of true progressives who will work assiduously to win in the July 16 governorship election.”

Aregbesola added that the present administration in Osun has deviated solely from the true tenets of the All Progressives Congress APC, while those at the helms of affairs have also jettisoned true democracy and the principles which the party and its heroes stands for.

He urged party faithful and stakeholders not to be disturbed but work in unison for the success of Adeoti in Saturday’s governorship primaries of the APC.

The former governor stated this in Ijebu Ijesa on Monday while addressing party faithful and stakeholders in the state ahead of the party’s primaries.

He also noted that the Rasaq Salinsile led party executives is the authentic APC in Osun.

Aregbesola said: “Anyone who was with us when we started the journey to reclaim Osun for the progressives in 2004 would know we fought very hard for this victory we have today. We went through several challenges then but through thick and thin, we were able to succeed. This time around, we will succeed.

“We are ready to allow a free flow of democratic process to interplay here. We are not those who play God. We are resolute about reclaiming our party from those who think they can continue to abuse our legacies or even want us to be second fiddles in the party we worked and laboured for. This is our pride and we will sustain it.

“Let me tell you that God is with us. I urge all of our supporters to come all out and back us. Do not have any fears. We are the authentic APC in Osun. If in Lagos, the governor did not do well and the party decided not to return him for a second term, why can’t it be so in Osun? They know what they have done to us is bad and they want to continue the impunity. We will not accept it.

“Do not be disturbed by their threats. Come out en-masse and vote for our aspirant. In Shaa Allah, Adeoti is the next governor of Osun. We should all support him.”

In his remarks, the leading governorship aspirant of the APC in Osun, Alhaji Moshood Adeoti expressed his gratitude to the party for the support.

Also at the event were the Chairman of the Party in the State, Alh. Razaq Salinsile; Former Speaker, Osun State House of Assembly, Rt. Hon. Najeem Salaam; Chairman of The Osun Progressives (TOP), Rev’d Lowo Adebiyi, Ward, Local Government and State Excos who emerged at the last congress of the party, and other party members who came to show solidarity.

Recall that Aregbesola has been enmeshed in deep feud with his successor, Governor Gboyega Oyetola.
Source:Timothy Agbor Thepoint Ng