Anxiety mounts over Ajimobi’s health in Oyo .. Aides Insist He Is Alive

by metronews
in Breaking, Health, News
0 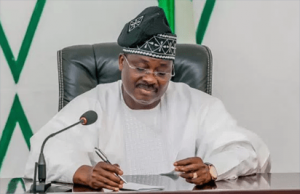 ANXIETY has mounted over the health of the immediate past Governor of Oyo State, Senator Abiola Ajimobi. Though his aides have been keeping the state of his health secret, Vanguard gathered from a reliable source that the former governor is seriously sick. According to the source who is close to the two-time governor of the state, it is a fact that the All Progressives Congress leader in the state is sick but the nature of the sickness is unknown. “Honestly, I can’t tell what exactly is wrong with him because that has remained a secret. But, I’m sure he is sick”. READ ALSO:Breaking: Nigerian troops kill Boko Haram commander When Vanguard called his former Special Adviser on Communication, Mr. Bolaji Tunji, on phone, for confirmation or denial of the story, he did not pick several calls made to him. Another source told Vanguard that the former governor is in Lagos State where he is receiving treatment. No member of the APC is willing to divulge any information regarding the health of the former governor. Contrary to a report that Governor Seyi Makinde reached out to him for the treatment of the undisclosed sickness, an aide of the incumbent governor dismissed
Vanguard