Anambra: Army Hands Over Suspects to the Police

Recall that in the early hours of Sunday 23 April 2017, a Cordon and Search Operation was conducted in Nteje area, Oyi Local Government Area of Anambra State by a joint team of the Department of State Security Services and  302 General Support Regiment Onitsha. As a result of the operation, two suspects were arrested, Seven Pump Action Guns, 44 live cartridges, a knife and two cutlasses were recovered. 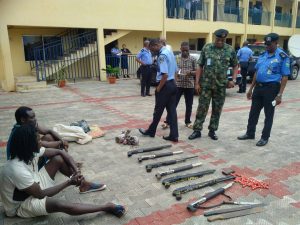 In line with the policy of the 82 Division Nigerian Army, the suspects (Mr Chukwunonso Ikewinlo – 34 years and Mr Christian Obalem – 45 years) and the exhibits were yesterday Monday 25 April, at about 1430 hours, handed over to the Nigerian Police, Anambra State Command by the Commander 302 Regiment Colonel Idongesit Uko Akpan for further necessary action.