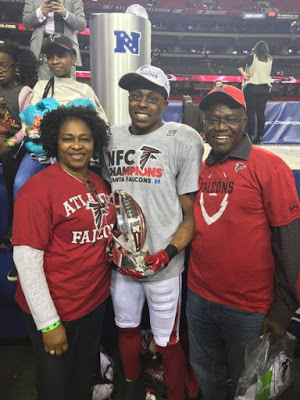 In less than three years after joining
professional football, the Nigerian-American Deji Olatoye will be
playing at his first Super Bowls this February. This follows the 44-21
victory of his Atlanta Falcons side over the Green Bay Parkers in the
National Football Conference (NFC) semi-final last Sunday. That victory
came with the coveted George Halas trophy, and the opportunity to
contest the overall National Football League top prize with the victors
at the semi final games of the rival conference, American Football
Conference (AFC). The AFC will be represented by at the Houston final
event on February 5 by seventh-time winners, and ninth-time finalists,
New England Patriots, led by the legendry Tom Brady. Atlanta Falcons
will only be making their second Super Bowls in history, the first being
in 1999.
25-year old Olatoye, a cornerback,
joined the Atlanta side in September 2016 after a move from Dallas
Cowboys, and was promoted from practice to active squad just two months
later. Olatoye, who grew up in Cleveland, Ohio, had played college
football in the two universities he attended, University of Colorado and
North Carolina A&T. Before that, he participated in a string of
sporting activities going back to his high school days, including
soccer, basketball and athletics. His four-foot, six-inches jump remains
the high jump record in his alma mater, Dublin Scioto High School,
Dublin, Ohio.

After the victory on Sunday, Olatoye kissed the Halas trophy and the photograph has gone viral. 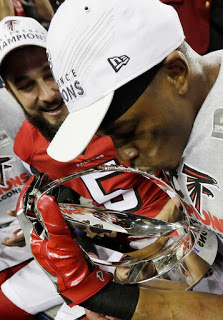 He also took time out to celebrate with his family who were in the stand
the whole time. Olatoye is the son of Nigerian immigrants Oye and Ade
Olatoye. The Olatoyes are originally from Okemesi in Ekiti State.