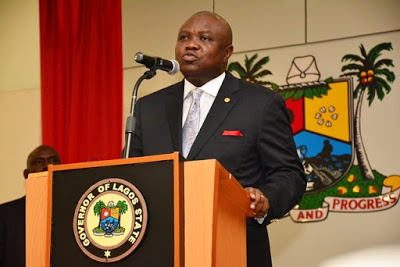 Lagos State Governor, Mr. Akinwunmi Ambode on Saturday evening formally flagged off the opening ceremony of activities lined up to commemorate the State’s Golden Jubilee Anniversary, just as he pledged that his administration would pay greater attention to the growth of young entrepreneurs and back it up with an enabling environment and friendly policies that will enhance success of their business initiatives.

The Governor also said that concerted efforts would be put in place to utilise the golden jubilee celebration to lay a solid foundation for another glorious 50 years in the State.

Governor Ambode, who spoke at the premiere of ‘Wakaa The Musical’, held at the new Terra Kulture Arena at Tiamiyu Savage Street, Victoria Island, said as the fifth largest economy in Africa, the State Government would explore all other areas of possibilities for growth while the future of the State would be premised on mutual love, peaceful coexistence, greater economic prosperity, tourism, urban renewal and infrastructure development projects that will complement its megacity status.

“On our part, we are determined and committed to fully explore all the possibilities presented by this moment to lay a solid foundation to another glorious and prosperous 50 years. This golden jubilee therefore presents a unique opportunity for us not only to celebrate our achievements, but also showcase to the entire world the immense potentials waiting to be tapped in our dear state,’’ he said.

He said the Government was more than committed to further boost the State’s economy by building capacities of young entrepreneurs especially in the areas of arts, culture, tourism  hospitality and other  businesses, urging the youths especially young graduates to take advantage of hospitality and friendly business environment to explore other areas of possibilities and  develop their entrepreneurial skills that would place them at vantage position in the on-going economic reforms of his administration.

Represented by his deputy, Dr. Oluranti Adebule, Governor Ambode said that the 50 years anniversary of the State presented a unique opportunity not only to celebrate the achievements of its founding fathers in the last 50 years but also to showcase to the entire world its rich cultural heritage and immense potentials waiting to be tapped by people with ideas and great vision.

Governor Ambode, while commending the founding fathers and all his predecessors for their great vision for the State, pledged that his administration would leave no stone unturned to build on their good legacies to deliver a new Lagos that will be the pride of every African man.

The Governor also lauded the Director/Executive Producer of Wakaa the Musical, who is also the founder of the Terra Kulture, Mrs. Bolanle Austen–Peters, for her initiative, focus and business ingenuity, noting that the actualization of the beautiful edifice which according to him was the first privately owned ultra-modern theatre in the country, was a reward for her selflessness, vision, courage, determination and belief in her abilities.

He noted that the partnership of the State Government with the Terra Kulture was not only to identify with the success story of the private cultural heritage, but a demonstration of his administration commitment to encourage younger generation to maximize their potentials.

Earlier in her opening remarks, Mrs Bolanle Austen-Peters Founder of Terra Kulture and the Executive Producer of Wakaa The Musical said Wakaa The Musical, was a compelling story of the travails young people go through after graduation in a bid to achieve their dreams.

The collection of plays according to her explored the challenges and obstacles young graduates faced after leaving their colleges and the assurance for victory and success when they show commitment, brevity and tenacity in the face adversity.

“Wakaa celebrates patriotism, honesty, diligence and the eventual success of excellence over mediocrity, greed and selfishness’’, she said.

The Lagos at 50 Celebrations which commenced from Saturday, April 8 2017 will feature series of interesting activities and will climax on Saturday 27th May 2017 to commemorate the May 27, 1967 date of the creation of Lagos State.