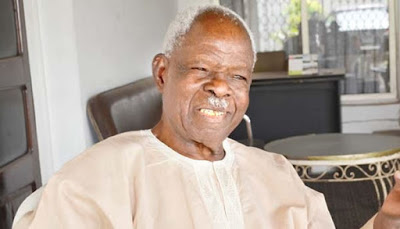 Lagos State Governor, Mr. Akinwunmi Ambode on Wednesday
expressed sadness over the demise of elder statesman and former military
governor of defunct Western Region, General Adeyinka Adebayo (rtd).
Adebayo died in Lagos on Wednesday morning at the age of 88
after a brief illness.
Governor Ambode in a statement signed by his Chief Press
Secretary, Mr. Habib Aruna, said Adebayo’s demise was a great loss to the
nation, especially the South West region.
“General Adebayo was a great patriot and one of Nigeria’s
foremost nationalists who never shied away from expressing his love for his
country and his people. He was a brilliant administrator who was known for his
dedication and zeal to serve his fatherland.
“Those who know papa would attest to the fact that he was a man
of many parts. For the Yoruba nation, this is a great loss. His passion to see
the integration of the South West region was second to none. No doubt, we would
miss his wise counsel especially at this time when our nation is on a path to
rebirth,” the Governor said.
Governor Ambode while commiserating with the family of the late
elder statesman urged them to uphold the ideals he stood and fought for, saying
that the nation will continue to draw inspiration from his life and times.
“His demise, just like that of our heroes past, must never be in
vain. There can be no better time to unite together to achieve a better and
more prosperous Nigeria,” he said.
He said General Adebayo paid his dues and has left his
footprints on the sands of time.
“On behalf of the government and people of Lagos State, I want
to express our heartfelt condolence to the family of General Adeyinka Adebayo
(rtd) on this great and irreparable loss. He was a pride to our country and we
will surely miss him,” Governor Ambode said.
Previous Post