Police authorities in Osogbo, Osun State capital yesterday arrested a 38-year-old man, identified as Ajibade Rasheed, with a fresh decapitated head of an old woman, including her private part, liver and intestine.
Other parts of the body found on the man include two palms, lungs and blood kept in a bottle.Parading the man with the strange discoveries, at the police headquarters, the Commissioner of Police, Mr. Fimihan Adeoye, said policemen on surveillance arrested the suspect at Oluode market, in Osogbo. 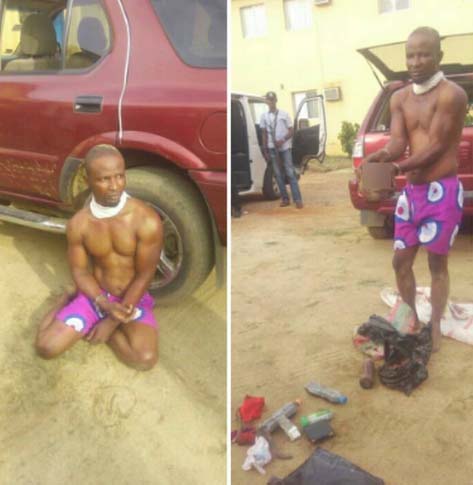 He said: “He was bringing the fresh human head and other vital organs of his victim from Aagba, a community in Boripe local council of Osun State. We want to establish the identity of the victim and get to know where and how the victim was killed.”
Adeoye said the police would get to the root of the dastardly act, adding that an accomplice to the suspect, who was in the vehicle in which the human head was found escaped and was being trailed by his men.
Rasheed, a native of Ikirun, said “I am an Alfa and herbalist. Somebody, who is known as Olorungbede came to me and said he wanted to do money ritual. I told him the materials for the job, which include fresh human head, private part of a woman and others and he said he would get it by himself.’’The man brought the fresh human head to me today. I am not the one who killed the woman.’’

Dopewear curses robbers: "You and your family…" (Video)

Dopewear curses robbers: "You and your family..." (Video)