A 33-year-old old woman identified as Desire Sokari West was stabbed to death on Sunday by her husband and father of her children over a domestic dispute at a house the couple shared in Buguma, Asari-Toru Local Government Area of Rivers State.

Daily Sun gathered that the victim, who was a mother of two boys, had a quarrel with her husband, Ibisaki, a native of Minama community in the same local government, over her supposedly refusing to prepare a meal for the family, which later resulted in a fight.

According to community sources, the victim had allegedly refused to prepare the meal as ordered by Ibisaki on Saturday, choosing instead to go out and celebrate her birthday with friends, before returning home late in the night. 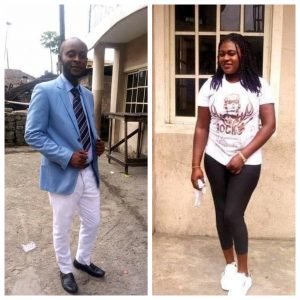 Sources say the couple have had many domestic incidents in the past, which had led to their separation, but had later reconciled following the intervention of their families.

On the day of the latest incident, while the couple were engaged in a fight, Ibisaki reportedly broke a bottle and stabbed Sokari on her lap, resulting in severe bleeding.

All efforts to save her eventually failed, as doctors were not found in the hospitals she was rushed to.

Sokari was later taken to the University of Port Harcourt Teaching Hospital (UPTH) in Choba, about an hours drive from the couple’s house, where she was confirmed dead by a doctor on duty.

Tonye David, a resident of the community where the incident occurred, said that the victim celebrated her birthday on Saturday in the community, and was killed by her husband on Sunday morning during a fight that ensued between them over a domestic argument.

“What led to the fight was that, on Saturday, the husband told her to cook. But, instead, she ignored his instruction and went out to celebrate her birthday. So, when she went home later in the evening, she met her husband eating the soup she refused to prepare. She tried to eat the food already drunk, but the man stopped her and she lifted the plate and poured the soup on the husband,” Tony narrated.

“Her action did not go [down] well with her husband who immediately stood up started beating her. He picked a bottle he collected from her in the cause of the fight, broke it and stabbed her lap. She fell down and was bleeding heavily. They rushed her to the Health Centre but there was no doctor to attend to her; they took her to a medical store to stop the blood, but no one was there to attend to her. So, it was when they took her to the UPTH that they met a doctor who examined her and confirmed that she had died.”

Ibisaki, on hearing that Sokari might not survive the stabbing, reportedly submitted himself to the Buguma Police Station.

State Police Public Relations Officer (PPRO), Nnamdi Omoni, a Deputy Superintendent of Police (DSP), confirmed the incident to journalists, adding that the suspect had been arrested by the police and is cooperating in their investigation.

“The man is with us now; he has been arrested and helping us in our investigation. He stabbed his wife on her left leg and she later died of bleeding, though he said he did not intend to kill her,” the police spokesman said.

Fayose down by eleven delegates as PDP disqualifies

Fayose down by eleven delegates as PDP disqualifies