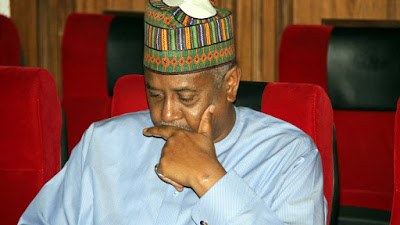 For the second time, the Federal Government applied to the Federal
High Court in Abuja for protection of witnesses that will testify
against the former National Security Adviser, Col. Sambo Dasuki in the
charges of unlawful possession of fire-arms and money laundering brought
against him.

The fresh application to that effect was brought
to court by Chief Oladipo Okpeseyi SAN, recently engaged by FG to lead
the prosecution.

The motion dated January 23 and filed January
24 is insisting that the witnesses must be given protection by the court
by not allowing their names and addresses to be made public in the
course of the trial.

But in a strong opposition to the fresh
request, Dasuki asked the court to dismiss the government motion on the
ground that it lacks merit and constituted a gross abuse of court
process.

The Ex-NSA in a counter affidavit filed by his lead
counsel, Mr. Ahmed Raji argued that there was no justification for the
Federal Government to have brought the motion for secret trial for the
second time having lost in the first motion.

The defendant
insisted that FG had on its own volition placed the charges against him
in the internet where the names, addresses and positions of the
witnesses were conspicuously put at the disposal of the general public.

Besides,
Dasuki maintained that when the first application argued by the then
Director of Public Prosecution of the Federation (DPPF), Mr. Mohamed
Diri, Justice Adeniyi Adenola of the same court in a landmark ruling
dismissed the request on the ground that the witnesses are already known
by the public having given their names through the internet.

He
further said that bringing the same motion to the same court
constituted a gross abuse of court process and that what the prosecution
ought to do if not satisfied with the decision of Justice Ademola, was
to have gone to court of Appeal to ventilate its anger.

Dasuki
who attached a copy of the earlier court ruling on the application urged
the trial judge, Justice Ahmed Ramat Mohammed not to allow the fresh
motion for secret trial to be entertained because it would violate his
right to fair trial and will run contrary to the principle of the rule
of law and natural justice.

When the motion came up today,
Opeseyi could not move the motion on the ground that the defence had
just served him a voluminous counter affidavit objecting to the motion.

He therefore applied for an adjournment to enable him study the counter affidavit and respond to it appropriately.

The
defence did not object to the request for the adjournment but clarified
that the fresh motion for secret trial was served on the defendant last
Thursday, hence their counter affidavit prepared over the weekend was
served today within the time allowed by law.

Justice Mohammed has therefore fixed hearing of the motion for March 1.

It
will be recalled that the Federal Government through the Department of
the State Security Service had in 2015 slammed a 2-count charge of
unlawful possession of fire-arms and money laundering against Dasuki.

But
the trial suffered a setback last year when Justice Ademola withdrew
from further conducting the trial following his arrest by the DSS on
allegations of corruption related matters.

The Ex-NSA who pleaded not guilty to the charges was in
2015 admitted to bail by justice Ademola but was dis-allowed by the DSS
from enjoying the bail by re-arresting him and keeping him in the
custody since December 2015. Other courts have also granted bails to
Dasuki include Ecowas Court’s order for his release but he is still
being kept in detention.