For months now, Tokunbo Owolabani, popularly known as ‘Toksbaba’ formerly of Page Nite Club ikeja could be said to be missing in action as the soft spoken city rocker have not been seen about town.

We can reveal that he has come up specifically for a groundbreaking impact in the fun seekers world.

He is set to put the city of Lagos and its environ on a standstill with the Opening of the exquisite Pose 24/7 Club and Lounge on Thursday 9th September, 2021.

The Pose 24/7 Club, Lounge and Cuisine located at 31, Isaac John Street, GRA Ikeja Opposite Radisson Blu, Metropark Plaza, is set to welcome Creme de la Creme of the society and socialites from all walks of life to its grand opening Party.

Toksbaba, the Host at the event promised fun seekers and socialites alike to witness a fun filled atmospheric condition.

In a statement signed by Toksbaba sent via his social media platform,he said, “Dear friend, This is to formally inform you of my latest venture. I’m pleased to invite you to the soft opening of “POSE” … my latest baby, I have prepared for your pleasure and leisure an exotic ambiance that will wherehouse a lounge, club and delicious cuisines. From 10pm on Thursday 9th of Sept, I will open the doors of maximum entertainment and fun at 31, Isaac John, opposite Raddison Blu, Ikeja GRA, Lagos.
Trust me, I am recharged to make you push your worries behind.Prepared to be surprised!!!

Toksbaba is a household name in the league of club operators in Lagos and across the South-West region, known for his groundbreaking impacts in the entertainment arena.

He has over a decade been the face and personality Manager between Page Night Club now known as Envogue Nite Club and its esteemed customers and has seen the Club come from obscurity to prominece.

Diversification and for the spread of It’s tentacles in the ever growing viable industry, have birthed Pose 24/7 Club.

The graduate of Business Administration, is vast, lettered, a Socialite per excellence and a jolly good fellow. Which makes his clientele and friends describe him as the emperor of night life, the Bashorun of Igbadun in Ikeja by popular music icons. 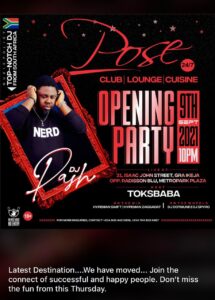