Lagos State Governor, Mr Akinwunmi Ambode on Thursday showered encomium on the late former Military Governor of the defunct Western Region, General Adeyinka Adebayo, describing him as an elder statesman who worked tirelessly for the progress of the Yoruba nation and unity of the country.
The late Adebayo, who died on March 8, 2017 in Lagos at 89 years, served as Governor of the region between 1966 and 1971. The defunct Western Region today has been broken into six South West States of Lagos, Ogun, Oyo, Ondo, Osun and Ekiti.
Speaking at a Commendation Service in honour of late Adebayo held at Archbishop Vinning Memorial Church Cathedral in Ikeja, Governor Ambode said the deceased was like a father to him whom he had a lot of respect for owing too the virtues and legacies he left behind during his sojourn on earth.
Lagos State Governor, Mr. Akinwunmi Ambode; Widow of Maj. Gen. Adeyinka Adebayo (rtd), Modupe; Son of the deceased & former Governor of Ekiti State, Otunba Niyi Adebayo; Daughter of the deceased, Mrs. Nike Makinde and her husband, Mr. Kunle Makinde during the commendation service for the Retired Major General at the Archbishop Vining Memorial Church Cathedral, G.R.A, Ikeja, Lagos, on Thursday, May 18, 2017. 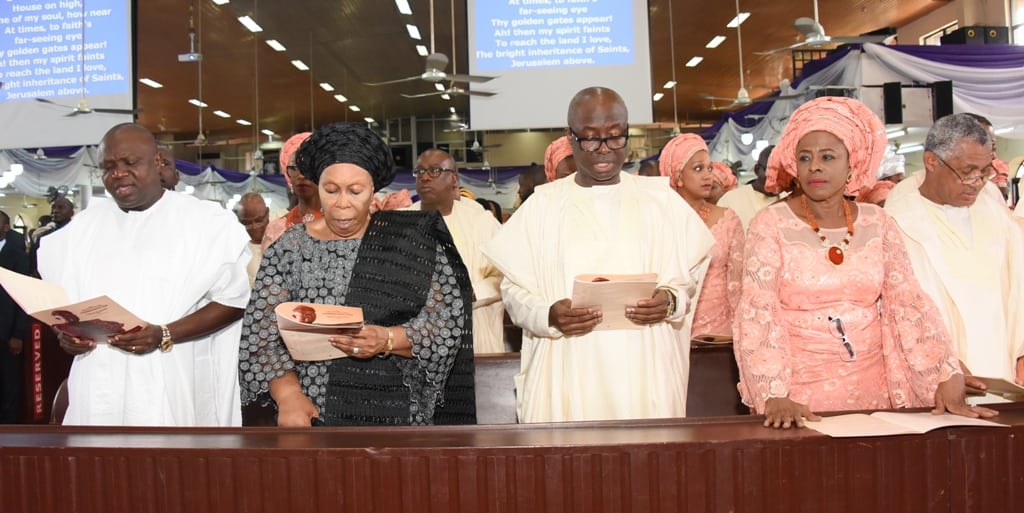 Lagos State Governor, Mr. Akinwunmi Ambode; Widow of Maj. Gen. Adeyinka Adebayo (rtd), Modupe; Son of the deceased & former Governor of Ekiti State, Otunba Niyi Adebayo; Daughter of the deceased, Mrs. Nike Makinde and her husband, Mr. Kunle Makinde during the commendation service for the Retired Major General at the Archbishop Vining Memorial Church Cathedral, G.R.A, Ikeja, Lagos, on Thursday, May 18, 2017.
“This is more or less like a family dad to me also because I feel that pain also in all the things that we had actually envisioned through Baba which more or less are the kind of baton we in this generation should take.
“For somebody to have died at the age Baba Adebayo died, there is so much he has taken away which we the younger Governors would not be able to assimilate enough but the major thing is that apart from being a fine gentle man, elderly man and perfect person, the bottom line was that Baba Adebayo had the love of the Yoruba race in his heart,” Governor Ambode said.
While urging Nigerians to unite to place the country on a sound footing for economic growth and prosperity, the Governor said the late Adebayo, in his lifetime, pursued the good course of unifying the country.
According to Governor Ambode, “He (late Adebayo) was an elder statesman who was also in love with the unity of Nigeria. He had a mission that is yet to be fulfilled by all of us and I think the time of his death has brought to the fore that main mission that we want to use to unite this country and that is why I believe strongly that wherever we are, wherever we find ourselves, Baba Adebayo has made his own difference, the remaining left for all of us is that whether we are in leadership position or any place we find ourselves, we should carry out that mission that he had always exemplified that we must come up strongly in unity and at the same time make Nigeria a very strong nation.”
The Governor commiserated with the widow and the entire family of the late Adebayo, saying that it was gratifying to note that Adebayo’s works had resulted in the blessings of God upon the family.
Earlier in his sermon, Bishop Diocese of Lagos West, Church of Nigeria (Anglican Communion), Rt. Revd. James Olusola Odedeji said in the history of Nigeria, the late Adebayo would be remembered for hard work, integrity, family virtues, generosity and selflessness in the discharge of duties, among other virtues.
Odedeji, who picked his text from the book of I Corinthians 15: 58, admonished Nigerians to engage in fruit bearing lifestyle and eschew selfish disposition to affairs and people.
“As Christians and Nigerians, we must make a difference in this corrupt and perverse generation by touching lives and leaving good legacy that is everlasting. Politicians especially should live a life to touch others positively,” Odedeji said.