0
SHARES
3
VIEWS
Share on FacebookShare on Twitter
The trial of
Jolly Nyame, a former governor of Taraba State, who is being prosecuted for a
N1.64 billion fraud could not go on, March 8, 2017 as expected as his defence
team did not produce its witnesses in court. 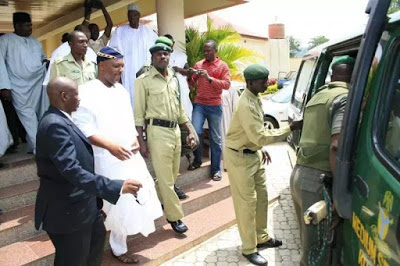 Justice
Adebukola Banjoko of the Federal Capital Territory, FCT, High Court, Gudu, had
on February 14, 2017 dismissed his no-case submission as lacking in merit, and
ordered him to begin his defence today.
The trial
judge had held that: “Having had a close look at the evidence and
exhibits, I hold that this case requires him to provide information and give
explanation with regards to evidence presented by the prosecution, and so he is
ordered to enter into his defence in the interest of justice.”
At the
resumed sitting, Olalekan Ojo, counsel for Nyame, told the court that he had
challenges in bringing three witnesses, which the defence had earlier told the
court that it intends to call, to testify in defence of Nyame.
“We had
conducted conferences with one of the witnesses, but unfortunately, the witness
was unable to be here,” he said.
He informed
the court that the first defence witness was a police officer from Gombe State,
and “we have decided that it will be necessary to have a subpoena served on him
in order to compel his presence in court.”
He
thereafter, pleaded with the court for an adjournment, as “failure to
bring our witnesses to court was not anticipated”.

Justice
Banjoko, who had earlier ruled that the trial would be on a day-to-day basis,
was however, compelled to adjourn to April 24, 2017.