The grand Board of Directors of the International Chartered World Learned Society, yesterday, honoured the Aare Onakakanfo of Yorubaland, Aare Gani Adams, with two most prestigious awards.

The first award was titled; The Most Notable and TopLeader of the 21stCentury. The second award was the; 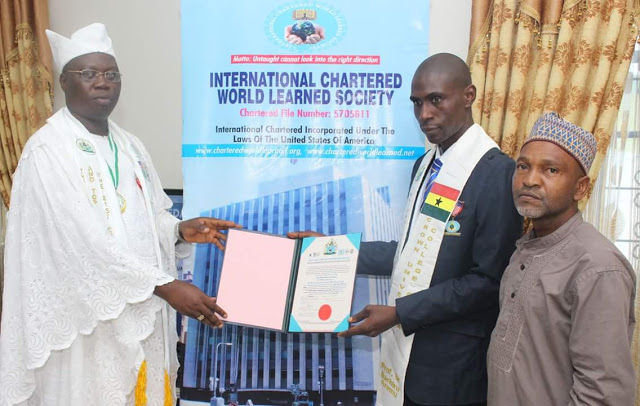 The two awards were presented in recognition of his various contributions to the development of the Yoruba race, most especially, in the area of right activism.

While presenting the awards, Vice Chancellor, Crown University College, Accra, Ghana, Professor Bashir Aremu, said he was happy to be the one presenting the awards to Aare Adams, who happens to be the holder of the most prestigious title in Yoruba land. He said the institution was recognized in all the continents of the world, including, Africa, Asia, Europe and America, adding that the intention of the board of directors, is to encourage service to humanity, especially, for those who have in their own little way sacrificed for the good of all.

Aremu stated further that all the presidents of the society representing all the continents assented to the certificate of the awards before it was being presented to the awardee.

‘’I have come to appreciate you on your various contributions to the development of Nigeria, and the Yoruba race in particular.

I have come to tell you that the world has reserved a special place in the book of history for people like you for their exemplary leadership qualities.

So as I present this award to you, I wish you well in all your future endeavours, believing that these awards will definitely, spur you on to take higher responsibilities in the nearest future,’’ he said.

Responding, Aare Adams, said he was humbled by the magnanimity of the board of directors of the institution for their decision to honour him with the two prestigious awards. He added that the awards would always spur him on to continue in his effort to seek a better society. ‘’I feel highly honoured and dignified with these awards. For me, it was a testimony of our efforts and struggles over the years to seek a better society where everybody will live peacefully without war and terror. It is this ideal that eventually, drove me into activism. So, on behalf of my self and the rest of my family, I am elated to receive these awards.