by metronews
in Event, News, Politics
0 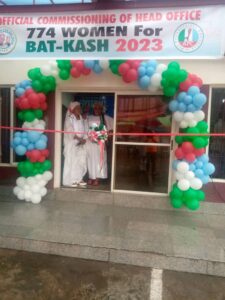 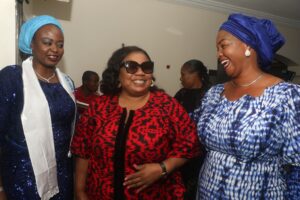 Ahead of the 2023 presidential election, a group of 774 women, cutting across all the local government areas in country, have launched a support group in support of the ambition of the presidential candidate of the All Progressives Congress, APC, Asiwaju Bola Ahmed Tinubu, and his running mate, Kashim Shettima.
The group, known as 774 Women for BAT-KASH, was officially launched with fanfare last Saturday, 10th September, 2022, with its head office located at Gwarimpa Estate, Abuja.
A prominent member of the group, Senator Binta Masi Garba, donated the building for the use of the group.
At the commissioning of the office were top personalities, led by  the Chairman Advisory Council of the group, General Buba Marwa (Rtd), who was represented by Mr. Otunba, Mrs. Shettima, Nigeria’s High Commissioner to Jamaica; Ambassador Maureen Tamuno, BOT Chairman of the group and Mrs. Jumoke Anifowose, daughter to the late  Ondo state governor, Adekunle Ajasin among several others.
Earlier, before the launch, the group kicked off its activities in Port-Harcourt, Rivers State, on Friday, 9th September, 2022.
A the well-attended event, which held at Elekahia Community Square, the group promised to support, campaign and vote for the APC presidential candidate and all APC candidates in River State and across the nation.
As part of its activities, the group visited the APC River State governorship candidate, Tonye Cole, who was made ambassador of the group.
Representatives from all the 23 local government areas of the state and their coordinators were presented to the leaders of the group at the Elekahia Community.
The National Coordinator of the group, Honurable Faith Pukuma, enjoined women to come out to exercise their constitutional rights in the democracy, adding that women should not allow themselves to be subdued.
Also speaking, Nigeria’s High Commissioner to Jamaica, Tamuno, who is also the South-South Coordinator of the group, lectured the women on the newly signed  electoral law, while encouraging them to use the opportunity to come out during the elections.
While the Chairman BOT, Barrister Jumoke Anifowose urged women to come out en masse and vote for all APC candidates in the 2023 general elections.
Some of the eminent personalities at the event include APC Senatorial candidate, Ndubuisi Nwankwo (Rivers East, Zamafara State Coordinator, Hajia Binta Mayana, National Organising Secretary, Hon. Christiana Ibrahim, APC South- South Women Leader and Mrs. Cinta Princewill among others top personalities.
Previous Post

I did more for Alabo than you, Wike replies Amaechi