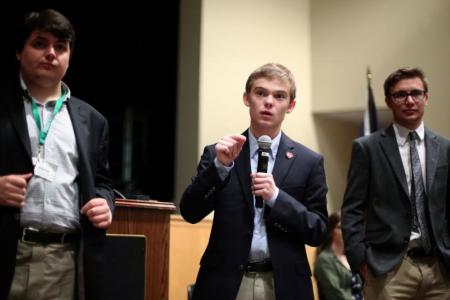 Kansas does not have a legal minimum age for the office of governor, and for the 2018 race, six teenagers have decided to avail themselves of this legal loophole to seek their state’s highest administrative office before they themselves can vote.

All six are boys aged 16 or 17. Four are running in the Republican primary — Tyler Ruzich, Dominic Scavuzzo, Joseph Tutera, and Ethan Randleas, the latter a libertarian on the GOP ballot — while just one, Jack Bergeson, is a Democrat. A sixth, Aaron Coleman, is running on the Green Party ticket, though the other boys say they are not sure he is still campaigning.

“You know, lots of people ask me, what can you, Tyler Ruzich, do for people my age?” Ruzich told The Washington Post. “I say, we keep continuing these Old Man Principles that aren’t working. In [Alexander] Hamilton’s time, someone my age could be commander of a frigate. Did the Founding Fathers consider that a 17-year-old might be governor? I don’t know. Did they consider that a reality-television businessman would become president of the United States after losing the popular vote? Probably not.”

This year’s Democratic primary has seven contenders and the Republican race 11, with the latter group including the incumbent, Gov. Jeff Colyer (R). His chief rival is Secretary of State Kris Kobach (R).

The Kansas City Star notes there is also no rule prohibiting a dog candidate, but so far none have entered the race. Bonnie Kristian

What Your Favorite Sex Position Says About You

What Your Favorite Sex Position Says About You