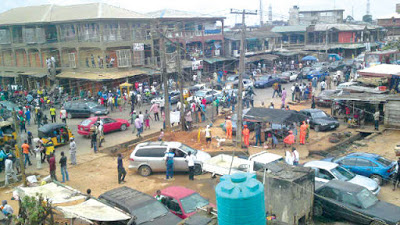 No fewer than five police officers and two soldiers, including an army captain were killed by suspected militants early Sunday morning in Ikorodu area of Lagos.
Sources told the News Agency of Nigeria that the bodies of the victims had been removed.
The slain captain was simply identified as Muhammad. There has been no official confirmation of the killings yet.
NAN gathered that the existing presence of the Joint Task Force called Operation Awatse did not deter the militants from operating in the area they were driven away from about a year ago by members of the same task force.
NAN also gathered that the militants had struck at Woodland Estate close to Ishawo Creeks and engaged the security personnel, soldiers and the police, in a gun duel.
“At the end of the gun duel, five policemen and two soldiers were reportedly gunned down by the militants,” the source told NAN.
It was unclear if there were any casualties on the part of the militants, although security forces were said to have reinforced and stormed the area for reconnaissance and possible counter-action.
When contacted, the Lagos State Police Command Public Relations Officer, Olarinde Famous-Cole, said he was still gathering information on the matter adding that a statement would soon be issued.
Previous Post