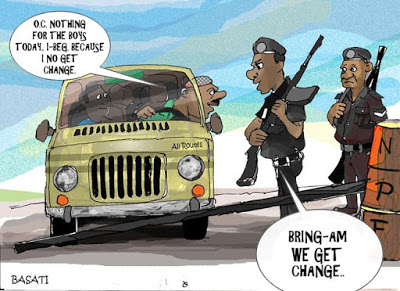 For having the effrontery to take photographs of a policewoman taking bribes from motorists on a Lagos road, a 40-year-old man, Chima Ordu, has found himself in prison after Mrs. J.O.E Adeyemi, the presiding magistrate of the Isolo Customary Court ordered that he should be remanded.
It was reported that the policewoman was flagging down motorists and collecting bribes from them at the Oludegun Junction in Isolo when Ordu decided to take her photos with his phone but he was arrested by the woman’s colleagues in the act.
It was gathered that the policewoman and her colleagues usually mounted the illegal road block and collected bribes from motorists at the junction on a daily basis.
Ordu however, found himself in trouble when he allegedly hid behind a fence and took photographs and video recording of the female officer not knowing that her colleagues who were in plain clothes had seen him and stealthily sneaked in and arrested him.
He was thereafter charged to the court on a one-count charge obstruction by snapping photos of a police officer performing her lawful duty under the Criminal Code.
Ordu pleaded not guilty when the charge was read to him and Magistrate Adeyemi granted him bail in the sum of N20,000 with one surety in like sum while ordering that he should remain in prison custody pending when he will perfect his bail.
Previous Post