21yo to die by hanging for stabbing pastor to death (Photo)

Two University students identified as Dogyi Kwame and Obio Akwasi, have been sentenced to death for murdering a Pastor in a robbery attack 10 months ago in Ghana.

The University students who are cousins, both aged 21 and students of Tamale Technical University, were handed the death sentence by Tamale High Court in the Northern region. The convicts who stole the Pastor’s Toyota Highlander vehicle before fleeing, attacked and killed 65-year-old Ebenezer Ocran, head pastor of End Time Bible Believers Fellowship, Tamale, at his residence in Kumbuyili.

They were however arrested in November 2017, after they forced themselves into the room of the deceased at about 12noon on November 10 2017, and killed him by stabbing him in the chest with a knife and also fractured his skull with a pestle. 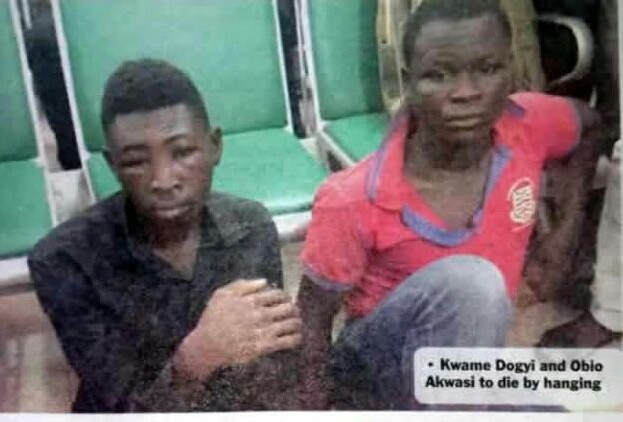 The University students gave the car they stole to a sprayer at the Tamale Industrial Area, to sell at GHS10,000. During the trial, the prosecution called nine witnesses, while the convicts called no witnesses, and at the end of it all te jury returned a verdict of guilty of conspiracy to commit crime.

Few months ago, it was reported that a cleric with the Nigerian Baptist Conference in Ondo State, Pastor Deji Joshua, was killed in Okitipupa, in the Okitipupa Local Government Area of the state by suspected armed robbers.

The deceased was the pastor in charge of the Goodnews Baptist Church, Igbegunrin, Ilaje/Apoi Association of the Ondo State Baptist Conference. According to a police source, the deceased was on his motorcycle when the suspected robbers killed him on Ode Aye Road.

The source, who said the incident occurred at about 11.30pm on Monday, added that the robbers stole the motorcycle. The Public Relations Officer of the Ondo State Police Command, Mr. Femi Joseph, said the command had commenced investigation into the sad incident.

FG plans to keep Metuh out of 2019 elections, lawmakers allege

I was naked when Trump called me, Kim Kardashian says

I was naked when Trump called me, Kim Kardashian says