2023 ELECTIONS: APC Has Nothing Against Modern Technology 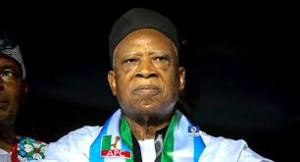 National Publicity Secretary of the All Progressives Congress (APC), Felix Morka, has said the party has no objection to the deployment of modern technology in the forthcoming general elections.

Morka clarification was on the heels of media reports attributed to the national chairman of the party, Senator Abdullahi Adamu, in which he expressed reservations about the use of the Bimodal Voter Accreditation System (BVAS) and INEC Election Result Viewing Portal (IReV).

At a meeting with a delegation of the Commonwealth Pre-Election team at the ruling party national secretariat in Abuja on Thursday, the APC national chairman said BVAS and IReV would not function optimally in the absence of stable electricity

But speaking with journalists in Abuja, Morka said the APC national chairman merely “tasked INEC to take effective steps to bridge any gaps that may be created by electricity and telecommunications network challenges in certain outlying voting districts in the country in order to ensure a smooth and successful deployment of BVAS and other technologies to ensure free and transparent elections.

“To be clear, Chairman Adamu did not kick against the deployment of BVAS or electronic transmission of results as erroneously reported by sections of the media.