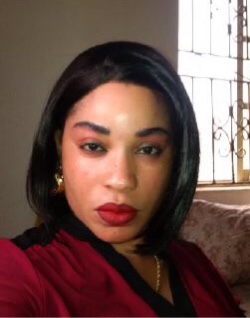 In what seems to be a scene from the Nollywood movies, restive youths stormed Magodo, a Lagos urban residential Estate demanding the where about of controversial actress and movie producer, Elizabeth Talabi.
According to information at the disposal of Metronewsng, Elizabeth Talabi incurred the wrath of the youths due to her involvement in a movie which they termed is promoting lesbianism and other immoral acts.
Although the youths are are divided in their position, some are demanding for her whereabout because she suddenly disappeared since the movie was released, while some want her punished for the role she played in the movie and her seeming support for same sex relationship.
We gathered that the Magodo community are now on the look out for her with some expressing fears over her life and safety especially after the protest visit of youths in the area.

Light skinned Elizabeth Talabi was said to have suddenly dropped out of circulation following negative reactions after the release of her last movie. Her whereabout remained a mystery as nobody seems to know where she is and her house have been deserted.
Previous Post