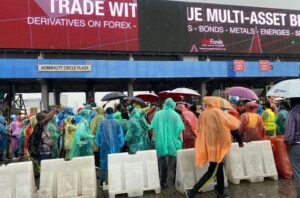 AGAINST the tides of various reports by local and international bodies on the shooting of protesters at the Lekki tollgate on October 20, 2020, the United States government has said the claims could not be verified.

In a report by the US Department of State, ‘2020 Country Reports on Human Rights Practices: Nigeria,’ released on March 30, 2021, the United States said accurate information on fatalities resulting from the shooting was not available at the end of the year.

“On October 20, members of the security forces enforced curfew by firing shots into the air to disperse protesters who had gathered at the Lekki Toll Gate in Lagos to protest abusive practices by the Nigerian Police Force’s Special Anti-Robbery Squad (SARS).

“Accurate information on fatalities resulting from the shooting was not available at year’s end. Amnesty International reported 10 persons died during the event, but the government disputed Amnesty’s report, and no other organisation was able to verify the claim.

“The government reported two deaths connected to the event. One body from the toll gate showed signs of blunt force trauma. A second body from another location in Lagos State had bullet wounds. The government acknowledged that soldiers armed with live ammunition were present at the Lekki Toll Gate.

“At year’s end the Lagos State Judicial Panel of Inquiry and Restitution continued to hear testimony and investigate the shooting at Lekki Toll Gate.”

Amnesty International and the United States-based Cable News Network (CNN) are leading voices to justify the claims by some of the protesters that there were fatalities and killings during the shootings by the military at the tollgate on the fateful day.

The Voice of America (VON) reported on October 22 that the US condemned police brutality at Lekki, two days after at least 12 protesters were reportedly shot dead by Nigerian security forces.

The then-Secretary of State, Mike Pompeo, had said: “We welcome an immediate investigation into any use of excessive force by members of the security forces. Those involved should be held to account in accordance with Nigerian law.”

Following that, the government sent a delegation to Nigeria with Counselor Ulrich Brechbühl meeting with Vice-President Yemi Osinbajo.

The release also stated reports of arbitrary and unlawful killings related to internal conflicts in the North-East and other areas.

It listed abduction by criminal groups in the Niger Delta, South-East and the North-West, often to collect ransom payments as one of the security concerns in the country.

“Other parts of the country also experienced a significant number of abductions. Prominent and wealthy figures were often targets of abduction, as were religious leaders, regional government leaders, police officers, students, and laborers, amongst others.

“In January the Emir of Potiskum, Alhaji Umaru Bubaram, and his convoy were attacked on the Kaduna-Zaria Highway. The emir was abducted, and several of his bodyguards were killed. The Abuja-Kaduna road axis was a major target for kidnappers, forcing most travellers to use the train,” it added.

The report regretted that impunity remained a significant problem in the security forces, including in the police, military, and the Department of State Services (DSS), adding that police remained susceptible to corruption, faced allegations of human rights abuses and operated with widespread impunity in the apprehension, illegal detention and torture of suspects.

“Although the total designed capacity of the country’s prisons was 50,153 inmates, as of October, prison facilities held 64,817 prisoners.

Speaking on the judiciary, the report said there was a widespread public perception that judges were easily bribed and litigants could not rely on the courts to render impartial judgments.

On insurgency in the North-East by Boko Haram and ISIS-WA, the report lamented numerous attacks on government and civilian targets, resulting in thousands of deaths and injuries, including the brutal killing of at least 76 farmers in Zabarmari in Borno State.

“Approximately half of the students abducted by Boko Haram from the Chibok Government Girls Secondary School in 2014 remained in captivity. Leah Sharibu remained the only student from the 2018 kidnapping in Dapchi in ISIS-WA captivity, reportedly because she refused to convert to Islam from Christianity,” it added.

The report said contrary to freedom of speech, security services detained and harassed journalists, sometimes for reporting on sensitive problems such as political corruption and security, adding that numerous journalists were killed, detained, abducted, or arrested during the year.